Independent TDs detained while trying to inspect US military craft 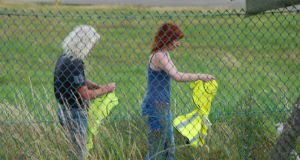 TDs Mick Wallace and Clare Daly have been arrested after attempting to search two planes at Shannon airport which they believed are being by the US military. Photograph: PA handout from Shannon Watch 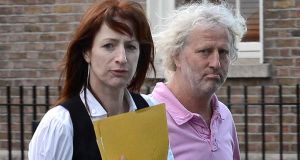 Mick Wallace and Clare Daly were detained after getting into the airside area of Shannon Airport where two aircraft were parked away from the main terminal. Photograph: Brenda Fitzsimons / The Irish Times 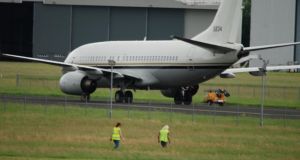 TDs Mick Wallace and Clare Daly during their alleged attempt to search two planes believed to be used by the US military at Shannon Airport. Photograph: PA handout from Shannon Watch

Two TDs have been arrested after attempting to search two planes which they believed are being by the US military.

Mick Wallace and Clare Daly were detained after getting into the airside area of Shannon Airport where two aircraft were parked away from the main terminal.

The Garda press office confirmed a man and a woman were arrested by airport police at 12.20pm after a security fence had been breached and they were subsequently handed over to local gardaí.

The pair, both independent TDs, were released without charge from Shannon Garda station at about 1.30pm and a file is being prepared for the DPP.

Speaking after his release, Mr Wallace said himself and Ms Daly had been raising the issue of US military planes reportedly carry troops and armaments through Shannon in the Dáil for a number of years and “ we keep getting told, ‘come back to us when you have proof’”.

He said when the Labour Party was in Opposition it said military aircraft should be inspected. “But when they got into Government they were happy to take US diplomatic assurances that arms weren’t on board.”

The Wexford TD said he and Ms Daly went to search the planes because “the State wasn’t in favour of searching them”.

He said they were “almost at the plane when we were intercepted by airport police, so we were stopped from getting on the plane”.

As such they cannot prove the aircraft were carrying weapons.

However, “we have been given much good reason to believe that a lot of these planes don’t move around unless they have armaments,” he said.

Earlier, Clare Daly accused the Government of “slavishly adhering to the American agenda”.

“It costs a huge amount of money to carry these aircraft across and they’re not carrying fellas across on their holidays,” she told Classic Hits 4FM.

Ed Horgan, an anti-war campaigner with the Peace and Neutrality Alliance and the Shannonwatch group, said he witnessed the two arrests.

“The aircraft were being guarded by the Irish army and Clare Daly and Mick Wallace were arrested by airport police quite close to the aircraft,” Mr Horgan said.

It is understood the two TDs were attempting to inspect a US Hercules transport plane and a second plane which is believed to be a Boeing 737 converted for use by the US military.

The TDs have campaigned for US military planes landing and refuelling at Shannon Airport to be searched independently to verify that allowing military aircraft at Shannon does not interfere with Ireland’s status as a neutral country.