Decision on Bloody Sunday prosecutions ‘by end of summer’ 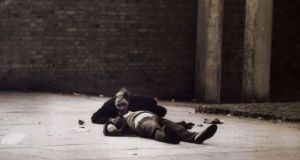 Bloody Sunday witness Paddy Walsh creeping towards Patrick Doherty, who was shot dead by Soldier F. The Saville Report found Doherty had been shot and mortally wounded as he tried to crawl to safety. Photograph: Gilles Peress

The North’s Public Prosecution Service (PPS) has said it hopes to decide whether to prosecute former soldiers in connection with Bloody Sunday before the end of the summer.

In a statement, the Service said their examination of the “complex files” surrounding the case has reached an “advanced stage”.

A murder investigation was launched by the PSNI in 2012 after the report of the Saville Inquiry into Bloody Sunday said all those who were killed or injured were innocent.

Investigation files were passed to the PPS in December 2016, and last year it was revealed charges may be brought in relation to Bloody Sunday against 18 soldiers.

In the letter to the victims’ families in September 2017, the PPS said it hoped it would be able to make a final decision on whether to recommend prosecutions within six months.

On Wednesday, the PPS said it had written to the families of the victims last week and provided them with a detailed explanation of the latest position.

“As indicated at the outset of the PPS’s consideration of these files, the volume of material and complexity of legal issues involved have made it difficult to provide a definitive timeframe for decision,” a PPS spokeswoman said.

“While there are still a number of important legal matters to be dealt with before final decisions can issue, the PPS is optimistic of being able to take those decisions before the end of the summer."

Prosecutions are also being considered against two other individuals in connection with alleged Official IRA activity on Bloody Sunday.

A member of the Official IRA told the Saville Inquiry they had shot at soldiers in retaliation to the shooting of two protestors.