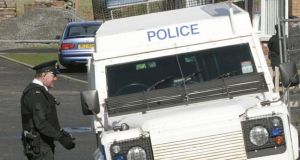 A man has been shot dead in a city centre flat in Derry.

Police and ambulance crews attended the first-floor apartment, above business premises in Shipquay Street, close to the Diamond area of the city.

Emergency services were alerted at around 11am and the scene was cordoned off.

SDLP Assembly member Pat Ramsey said people were stunned. He said: “There is a sense of bewilderment and awfulness. This happened right in the heart of the city.”

The incident comes a day after a man in his 40s was found murdered in a lake in north Belfast.