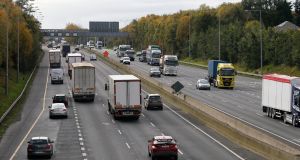 M50 on the first day of Level-5 lockdown: “For the year to date, 126 people have been killed on Irish roads – an increase of 10 on last year, despite significant restrictions on travel between March and July.” Photograph: Crispin Rodwell

Car crashes on Ireland’s roads have increased threefold during the latest tightened coronavirus restrictions compared to the first lockdown in spring, according to analysis by AA Ireland.

The motoring organisation said traffic volumes were also at twice the level they were during the first “stay at home” lockdown in March.

During the first two weeks of the Government’s latest Level-5 restrictions, traffic on major routes countrywide dropped to 60-65 per cent of what they would be during a typical weekday in October, the analysis found.

This compares to traffic levels as low as 35 per cent of normal volumes during the first lockdown in March.

AA Ireland attributed the increase to schools remaining open and more industries, such as construction sites, being allowed to continue to operate during the current six-week restrictions.

It was further found that crashes reported by the motoring organisation trebled from 11 during the initial two weeks of the first lockdown to 37 over the past fortnight.

The figures are based on AA Ireland’s own reports of traffic disruption as a result of collisions.

Conor Faughnan, spokesman for the organisation, described the “significant” hike in crashes and other traffic incidents as “a cause of concern”.

“Late October and the winter period is traditionally a dangerous period on our roads, but despite lower volumes during traditional commuting periods, incidents are still occurring at a worrying rate,” he said.

“For the year to date, 126 people have been killed on Irish roads – an increase of 10 on last year, despite the fact that we saw significant restrictions on travel between March and July of this year.

“Now that we are also dealing with reduced daylight and poor weather conditions, those who must travel must adapt their driving accordingly to prevent any further increases in incidents, crashes or fatalities.”