Man due in court over Castleknock chess killing 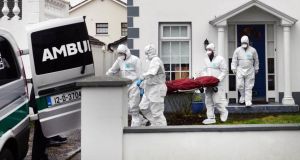 The body of a man is taken from a house in Beechpark Avenue, Castleknock, Dublin on Sunday. Photograph: Dara Mac Dónaill/The Irish Times

A man is due to appear in court this morning to be charged over the murder of Dubliner Tom O’Gorman, who was beaten and stabbed to death in a row over a game of chess.

The suspect, a 34-year-old Italian national from Palermo in Sicily, was arrested at the scene under section 4 of the Criminal Justice Act and taken to Blanchardstown Garda station.

He is due to appear at Blanchardstown District Court at 10.30am.

Mr O’Gorman, a minister of the Eucharist who was involved in a number of Catholic groups and campaigns, was attacked at his home in Castleknock, west Dublin, in the early hours of yesterday morning.

The chief suspect was still at the large detached property on Beechpark Avenue when gardaí arrived just before 2am. It was he who made the call to the Garda to alert them to the fatal attack.

Detectives are working on the theory that Mr O’Gorman (37), a single man, knew the chief suspect and that both were playing chess at the house when the deceased was attacked in a dispute over the movement of a chess piece.

Gardaí believe only Mr O’Gorman and the man in custody were in the property when the attack occurred.

Lived alone
The dead man had grown up in the house where he was killed and after the death of his mother in 2012 had lived there alone.

He later took in a lodger, who still lives at the house.

Mr O’Gorman’s father, who worked as a vet, died several years ago.

His brother, Paul, lives in Donegal and his sister, Catherine, is based in the UK.

Gardaí arrived at the scene early yesterday and the house was immediately sealed off.

The body underwent a preliminary examination yesterday morning at the scene by State Pathologist Prof Marie Cassidy. The remains were removed to the city morgue in Marino, for a full postmortem. The property where the murder occurred underwent a forensic examination by the Garda Technical Bureau.

The scene was described as gruesome by gardaí.

Mr O’Gorman worked as a researcher for the Iona Institute, a Dublin-based Catholic advocacy group that promotes the place of marriage and religion in society. The group is headed by well-known social commentator and journalist David Quinn, who last night expressed the group’s “total shock and deep sorrow” at what he called his colleague’s “terrible and untimely” death.