Man arrested after gun and ammunition seized in Dublin 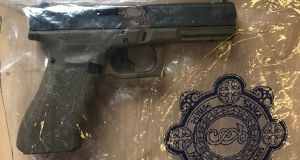 The gun and ammunition have been sent for analysis to the Garda Ballistics Unit.

Gardaí in Dublin have seized a Glock pistol and 12 rounds of ammunition after they stopped and searched a car in Clondalkin.

The car was stopped on the Neilstown Road at 7.20pm on Friday night.

They searched a bag in the car and found a Glock pistol and 12 rounds of ammunition.

A man is his early 20s was arrested at the scene and is being held at Ronanstown Garda Station.

The gun and ammunition have been sent for analysis to the Garda Ballistics Unit. – PA