‘Making A Murderer’: How safe is our criminal justice system?

Trailer for the Netflix documentary series, Making a Murderer. 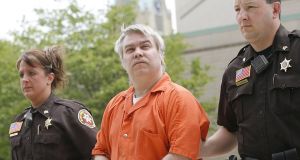 Everyone’s talking about Making A Murderer, the ground-breaking documentary series from Netflix which explores the case of Steven Avery, the Wisconsin man who served 18 years in prison for rape before being exonerated by new DNA evidence.

After his release, Avery took a $36 million wrongful conviction lawsuit against the county and the sheriff. Shortly afterwards, he was charged with murdering 25-year-old Teresa Halbach. Avery’s nephew, Brendan Dassey, a 16-year-old with learning disabilities, was also implicated in the murder, based solely on a highly questionable confession.

Are they guilty or innocent? The programme poses some very serious questions about the murder investigation and Avery and Dassey’s prosecutions. It also explores allegations of police corruption and the fairness of the US justice system.

But could the events depicted in Making A Murderer happen in Ireland? Or, indeed, have similar events occurred? Just how safe is our own criminal justice system?

“What happened to Avery could happen anywhere to anyone at any time,” says Anne Driscoll, manager of the Irish Innocence Project at Griffith College Dublin, which brings together students from across law and journalism to work on Irish cases involving potential miscarriages of justice, under the supervision of pro bono lawyers. “Wrongful convictions know no boundaries and no borders.”

The current caseload of the Innocence Project includes people who have been convicted of serious offences including murder, rape and sexual assault, as well as people who have served their sentence and wish to clear their name. They include people who are illiterate, non-Irish national or from disadvantaged backgrounds.

About 20-25 per cent of their caseload involve Travellers protesting their innocence. The Innocence Project only takes on cases where convicted people have exhausted all avenues of appeal and have no other legal representation, and where they believe the convicted person is innocent.

“Around 66-75 per cent of cases brought to us move forward because we believe a miscarriage of justice has happened and it is likely we can find new or newly discovered evidence,” says Driscoll. “Some fall away because we don’t believe the person is innocent and sometimes, despite exhaustive efforts, we can’t prove their innocence.”

Driscoll says wrongful convictions can happen because people confess to things they did not do. This occurred in the case of Dean Lyons, who confessed to the Grangegorman murders which were, in fact, committed by Mark Nash. “It is counter-intuitive, but it happens,” she says.

That said, solicitors and barristers agree the legal protections on offer in Ireland are significantly stronger than in the US.

Tony McGillicuddy is a barrister who has represented many defendants in criminal trials.

“No system is failsafe or perfect, including the Irish system, but we have some structural protections in this country, principally the operation of the criminal legal aid scheme, which provides for better conditions for accused persons in Ireland than is the case in the US,” he says.

He says that in Ireland new laws ensure solicitors can now be present during Garda interviews and anyone charged with a criminal offence and who cannot afford legal representation can choose their solicitor from the criminal legal aid scheme panel, which includes solicitors who specialise in criminal defence work.

He also notes there are strong requirements for the prosecution to disclose their evidence in advance of the trial, which assists the defence in preparing their case. In addition, there are restrictions on media coverage of trials, which helps prevent the jury from being influenced. Finally, people convicted of a crime can still access legal aid for their appeal.

When it comes to the risk of wrongful conviction, there are still some factors which particularly concern lawyers.

“Evidence from all countries is that mistaken identification is the most common reason for wrongful convictions, as honest witnesses often make mistakes,” says McGillicuddy. “There are also concerns about the operation of the witness protection programme, which is not statutory here and operates on an ad-hoc basis.”

In Making A Murderer, major questions are asked about the conduct of the police, including allegations evidence was planted. Over the past decade, the Morris and Smithwick tribunals have uncovered evidence of corrupt and dishonest policing in Ireland, leading to reforms including the establishment of the Garda Síochána Ombudsman Commission.

The Morris tribunal, for instance, laid bare significant Garda malfeasance in Donegal which caused innocent people to be convicted.

Over the past 40 years, the Irish Council for Civil Liberties (ICCL) has highlighted concerns over the administration of justice in Ireland. Deputy director Deirdre Duffy says a miscarriage of justice allows a guilty person to walk free and can affect the victim “horrendously”. But there have been improvements in Ireland, including bringing our DNA database in line with the European Convention on Human Rights.

Duffy says there is still a need for more comprehensive investigations into, and reform of, the Garda. The ICCL has welcomed the establishment of the Policing Authority but says it will take time to see if the reforms make a real difference.

Along with many legal experts, the ICCL is particularly concerned about a recent Supreme Court ruling that allows evidence obtained in breach of a suspect’s constitutional rights to be used in court. Duffy says it increases the risk of a miscarriage of justice and is “a chipping-away of rights”.

Making A Murderer should make us sit up and reassess our criminal justice system, says McGillicuddy.

“Whether or not Avery and Dassey are guilty, there is a public interest in ensuring defendants get a fair trial. Wrongful convictions erode confidence in the criminal justice system,” he says.

PETER PRINGLE Wrongly convicted of murdering a garda in 1980, sentenced to death and exonerated after 15 years. Now married to former US death row inmate (now exonerated), Sunny Jacobs, and living in the west of Ireland.

FEICHIN HANNON Granted a certificate of miscarriage of justice after his conviction for sexual assault in 1999 was quashed when complainant admitted she had invented the allegations. There were major questions about the State’s handling of the case.

NORA WALL A nun accused of rape following false allegations by two women who later admitted lying, Wall served four days of a life sentence in 1999 before her conviction was quashed. The trial took place against the background of widespread revelations about clerical child abuse, which may have influenced the jury. In 2005, Wall was declared the victim of a miscarriage of justice.