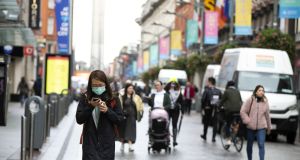 Some 189 of Wednesday’s cases were in Dublin. Photograph: Sam Boal/Rollingnews.ie

Fifteen students in a university class tested positive for Covid-19 after mingling during their break time, according to public health officials in the west.

In another example cited by officials, a single person appears to have infected six people at an adjoining table in a gastro-pub, as well as four staff, a National Public Health Emergency Team (NPHET) briefing has heard.

Three large outbreaks arose after heavy socialising by groups, sometimes across the generations, according to officials, who appealed to people to drastically cut their social contacts in order to limit the spread of the disease.

A further 429 confirmed cases of Covid-19 were reported by NPHET yesterday.

This brings to 36,155 the total number of cases of the disease in the Republic.

Some 189 of the new cases are in Dublin, and 60 in Cork. There were also 31 cases in Donegal, 28 in Galway, 18 in Kildare, 15 in Wicklow, 15 in Clare, 12 in Limerick, nine in Meath, nine in Louth, seven in Cavan, seven in Longford, six in Laois, five in Offaly and five in Westmeath, with the remaining 14 cases in eight counties.

One further death was reported to NPHET, bringing the total number of deaths to 1,804.

Prof Philip Nolan, chair of the NPHET epidemiological modelling advisory group, said while they were “cautiously optimistic about Dublin” there had been “relatively high case numbers in the last few days. It will be a number of days yet before the pattern is clear,” he told the briefing.

There are currently 130 people with Covid-19 in hospital, including 15 admissions in the past 24 hours, according to acting chief medical officer Dr Ronan Glynn. He said while school-age cases were stable, there had been a sharp rise in cases among 19-24 year-olds and the rise in cases among over-65s was of concern.

Public health officials gave examples of recent clusters that have occurred in the west.

One cluster of 30 cases arose after a young couple went away for a weekend and attended a house party. This resulted in six to eight cases, and cases in three to four households. On the second day of their trip, they went with friends to a town centre, resulting in four more cases.

They attended a bar, where six people at an adjacent table, and four staff, tested positive. They then went on to a “drinks venue”, where four more cases occurred.

In another cluster of 24 cases involving intergenerational social mixing, the outbreak started in a small rural place where middle-aged people had gathered. There was socialising in a pub and workplace and further transmission occurred in the pub over the weekend. Fourteen of the cases were directly linked to socialising and 11 involved people aged between 45 and 70.

In the outbreak, there were three family clusters, three schools were affected and also one workplace.

Meanwhile, Northern Ireland is likely to have more restrictions imposed due to the sharp rise in the number in the number of Covid-19 cases, the North’s Minister of Health Robin Swann has warned.

The Minister said the North was now “at a crossroads” after his department reported 424 new cases of coronavirus in Northern Ireland – the highest rate recorded since the outbreak of the pandemic. In its daily bulletin issued yesterday afternoon, it also reported one more Covid-19 death, taking the total number of deaths in Northern Ireland to 579.