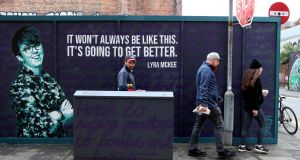 Four men have been arrested by police investigating the death of Lyra McKee.

The journalist (29) was shot dead while watching disturbances in Derry last month.

Dissident republican group the New IRA said its members carried out the killing.

On Thursday morning, the PSNI said four people had been arrested as part of the murder investigation.

They have been taken to the serious crime suite in Musgrave Station, Belfast where they are currently being questioned by detectives.

“As part of this morning’s operation detectives carried out searches at four houses in the city and arrested four people in connection with the violence which was orchestrated on the streets of Creggan on the evening of Lyra McKee’s murder,” he said.

“They are currently in custody where they are being questioned.

“I want to thank the public for the widespread support we have received to date, including more than 140 people who have provided images, footage and other details via our dedicated major incident public portal.

“I still want to hear from anyone who can tell us anything they know.

“I would urge anyone who has any information to contact my team of detectives on 101.

“Alternatively, if you would prefer to provide information without giving your details, you can contact the independent charity Crimestoppers and speak to them anonymously on 0800 555 111.”

Meanwhile a sister of Ms McKee has appealed for her sibling’s killers to hand themselves in to police.

Nichola Corner said it was a “terrible irony” that her sister’s killers have robbed themselves of the one person who would have tried to help them.

“She deserves justice and those people need to really think about handing themselves in. They need to do the right thing,” Ms Corner said.

“None of this will ever bring my sister back to my mum, to me, to my brothers, my sisters, or nieces and nephews.

“And as far as I’m concerned, that is the least that these people can do. And anyone who is helping them or guarding them or protecting them, they need to do the right thing as well.”

“There is a terrible irony in our Lyra’s murder because she would have understood these people or tried to, and she would have tried to help them,” she said.

“I suppose they robbed themselves of one person who would have wanted to hear their story and would want to help them move forward.”

Ms Corner, who delivered a eulogy at her sister’s funeral on April 24th, made her comments to Channel 4 News.