London Isis attacker ‘had not been in Ireland for two years’

Garda personnel fire blank rounds and use stun grenades during a mock international terror attack at the Docklands Rail Station in Dublin. 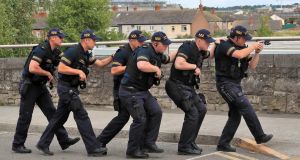 The Islamic State terrorist who took part in last month’s London terror attack and was found to have lived in Ireland had not been in the Republic for two years, it has been confirmed.

Garda Commissioner Nóirín O’Sullivan said network of Rachid Redouane (30) in Ireland had been investigated and showed no signs of any terrorist activity.

While she did not say so, the results of the Garda investigation in the six weeks since the attack strongly suggest Redouane had not been radicalised when he lived in Dublin.

Ms O’Sullivan said the Garda had worked rapidly and seamlessly with the British authorities in investigating Redouane and his activities in Ireland.

“Even though there was some speculation about a terror network operating here, very quickly we were able to establish that that in fact was not the case,” she said.

The attack occurred on June 3rd near London Bridge, with eight people stabbed to death and 48 injured before the police shot dead the three attackers.

Ms O’Sullivan dismissed any suggestion Redouane had even received or been offered any logistical assistance in Ireland.

“If fact, we established he had not even been here since 2015, despite some of the speculation,” she said.

Ms O’Sullivan was speaking to the media this morning after armed Garda units had undergone a mock international terror attack training exercise at a Dublin train station.

She added the Garda had no intelligence indicating any threat of an attack in Ireland by international terrorists. And while the threat from dissident republicans was “immediate and real” it was officially rated as “low”.

However, the Garda was working constantly to detect dissident Republican activity because the threat level in the North was severe.

“It was capable of making 30 under-vehicle improvise explosive devices. One of those was made up in that car and ready for deployment.”

The Garda had been so successful in catching dissidents, she said, that for the first time in the history of the State there were two Special Criminal Courts “and both are booked up until the spring if 2019”.

However, the threat from domestic and international terrorists must be kept in perspective.

“It’s really important (to say) Ireland is a very safe place. We’ve no intelligence to say that (an attack) is going to happen here. But we have to be realistic.

“We have to look at what’s happening in other jurisdictions and we have to make sure that we’re prepared well enough to respond.”

She added the Garda was now recording its response times to a range of emergencies. And based on the times recorded to date she was confident in the force’s ability to react quickly if a major incident occurred.

The threat feuding crime gangs was also very real, especially in Dublin. And with the need to have armed responses in the capital and other parts of the country a number of new armed Garda teams had been established.

Plans had already been announced for 10 Armed Support Units nationwide. A small number of these were already operating and others were being readied.

They will be located in Cork, Galway, Ballyshannon, Dundalk, Mullingar, Waterford, Limerick Cahir and Claremorris and will be operational by the end of the year.

The Armed Support Unit for Dublin was already operational and the Special Detective Unit, which investigates terrorism, had been augmented recently.

Ms O’Sullivan added the most significant threat from armed crime or terrorism was posed in areas with high density population.

“So we have to prioritise our training exercises in those areas. But there will be further training which will look at and test our response capability outside Dublin.”

This morning’s training exercise involved two attackers running over a cyclist outside Docklands Rail Station off Sheriff St, Dublin 1, and the stabbing her and another woman - both played by actors.

The attackers, armed with a machine gun and a large knife, then went into the train station and shot and stabbed people in the ticketing area.

Local gardaí arrived out the scene outside and tended to the two stabbed women. They called for back-up from the Armed Support Unit and the Emergency Response Unit.

When those units arrived they tackled the terrorists in the ticketing area of the station, shooting and arresting one though the other took hostages on a DART.

After a number of minutes the armed units entered the train and evacuated the hostages after the armed terrorist was shot by a Garda sniper perched on a mound of rocks about 700 metres from the platform.

All of the Garda members were on regular duty this morning and were called to the scene via Garda radio as they would to a regular emergency incident.

However, they were told it was a training exercise. As well as local uniformed gardaí and the armed units, the Garda Helicopter monitoring events from the sky above in what was a large scale operation.

The train station used for the incident only operates in rush hour meaning the Garda and actors could take it over and role play the exercise in four phases of an hour during late morning.

The Garda cars called to the scene arrived between one and six minutes of receiving the emergency call on the Garda radio.