Counsel says Boy A has no personality disorder or mental illness 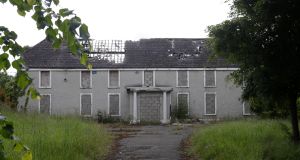 The disused farmhouse in Liexlip, Kildare where Ana Kriégel was murdered in May 2018. Photograph: Collins Dublin

The boy who murdered and sexually assaulted Ana Kriégel in 2018 has admitted causing her death but prosecutors say they still do not know why she was killed.

A sentencing hearing for the boy, known publicly as Boy A, and his co-accused, who is known as Boy B, heard on Tuesday that since being remanded in custody last June, Boy A has admitted causing various injuries to the 14-year-old-girl in a disused farmhouse in Leixlip, Kildare on May 14th, 2018.

Throughout the Garda investigation and the trial the boy denied murdering Ana or even being at the scene. He told gardaí he left Ana in a nearby park after telling her he did not want to go out with her.

The hearing at the Central Criminal Court heard that reports prepared by psychiatrists who have examined the boy in recent months suggest he now admits causing her death.

Prosecuting counsel Brendan Grehan SC said that Boy A admitted putting Ana in a head lock and choke hold as well as kicking and hitting her with a stick. He also said he hit her with a block or threw the block at her on three occasions.

A concrete block and wooden stick, both with extensive blood staining were both found near Ana’s body.

However, the boy continues to deny sexually assaulting Ana and has offered “an alternative explanation” as to how his semen got on Ana’s ripped top which was found near her body.

Mr Grehan did not go into the details of this explanation.

Boy B who is believed to have lured Ana to the house where she was killed continues to deny involvement in her murder and rejects the verdict of the jury, the court heard.

Counsel said he maintains the same position as when he was last interviewed by gardaí, that he saw Boy A attack Ana but was not involved in planning her murder. He claimed he ran away when the attack started and heard Ana scream as he fled.

Mr Grehan told the court there are still many unanswered questions about Ana’s murder, including why she was murdered.

Det Insp Mark O’Neill, who acted as senior investigation officer during the murder inquiry, agreed with counsel that many questions remain.

It is not known how much discussion there was between the boys about killing Ana that day, he said. There is also a dispute about whose idea it was to meet Ana that day and who decided Boy B should call to her house to get her.

It is not known who decided they should all meet at Glenwood House or who brought various items to the house, including the tape which was found wrapped around Ana’s neck.

Counsel said we also do not know who smashed Ana’s phone when it started to ring.

Mr Justice Paul McDermott had been given extensive psychiatric reports on both boys ahead of sentencing but few details of these reports emerged in court.

Counsel for Boy A, Patrick Gageby SC said the reports do not indicate his actions were caused by environmental factors. He said Boy A comes from “a small, close, loving, supportive family”.

Boy A was “far from calm and collected” in the aftermath of the murder, counsel said, and this could be seen during the course of the trial. The reports before the court indicate substantial “remorse and tears”.

There is nothing in the reports to indicate a mental illness or personality disorder, counsel said. All the experts who examined him agree “there is much work to be done” with the boy to “bring him to the full realisation of the consequences of his actions that day”.

Det Insp O’Neill agreed with counsel there have been various instances of Boy A being named publicly, including through graffiti.

Boy A’s grandfather gave evidence that his grandson was “incredibly remorseful” about what happened to the teenage girl and wished it never occurred.

Between the ages of 11 and 13 can be a difficult time for boys, both mentally and physically, he said, adding that boys of this age can be difficult for parents and teachers to manage but the majority of them remain “unaffected by new circumstances”. The man said his grandson was “one of the majority”, who loved practical subjects such as art, science, and woodwork as well as metalwork and nothing pleased him more than preparing detailed drawings and making models.

“I am personally heartbroken that my much-loved grandson could have been involved in something like this,” he said. His grandchild was a loving, caring and kind child, “who never showed aggression or ill-temper,” the grandfather said.

Counsel for Boy B Damien Colgan SC said his client does not accept the verdict of the jury but that he has expressed remorse and guilt about not stepping in to save Ana that day.

Counsel said his failure to step in has led to a falling out between the boy and his father. His father was not in court on Tuesday.

Counsel said Boy B’s family are isolated in the community. They have never come to Garda attention and attempted to help with the investigation as much as possible, he said.

Mr Colgan said a report stated Boy B is at a low risk of re-offending. However, this was disputed by Mr Grehan who said that assertion was predicated on the belief that the boy was not involved with Ana’s murder. Therefore, counsel said, it should not be taken as fact by the court.