Derek Hutch was most likely being watched by killers, say Garda sources 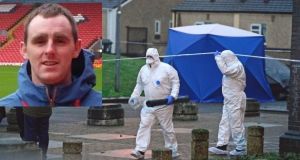 The man shot dead in Dublin on Saturday may have gone to the area where he was gunned down to throw drugs over a prison wall, gardaí believe.

Derek Coakley-Hutch (27), also known as Derek Hutch was killed in a gun attack at the Bridgeview halting site beside Cloverhill Prison at about 3pm.

He was the fourth member of the Hutch family to be shot dead in just over two years. The other three victims were murdered as part of the Kinahan-Hutch feud.

Gardaí believe yesterday’s murder may have been feud related. If so, the killing would bring to 14 the number of men murdered in the feud to date.

Two months ago, a judge spared Coakley-Hutch, a petty criminal and father of two, a four-year prison sentence because he had made such efforts to turn his life around.

The full term, for an armed robbery on a Spar shop using an imitation firearm, was suspend when the court was told of a glowing probation report and the efforts he had made to address his drugs habit.

Coakley-Hutch was a nephew of Gerry Hutch, the veteran north inner city Dublin criminal known as The Monk.

Another uncle, Eddie Hutch, as well as two cousins – Gary and Gareth – have all been shot dead as part of the Kinahan-Hutch feud.

Coakley-Hutch had at least 10 criminal convictions. However, some were linked to his drug use and he was not regarded as a major criminal.

He had gone to Cloverhill Prison earlier in the day to visit his brother Nathan. Coakley-Hutch returned to the area yesterday afternoon with two other men in a car.

They had driven into the halting site, next to the prison walls, when the killers struck. The victim was sitting in the car when he was shot.

There was no reports of injury to the other men he was with, one of whom was also in the vehicle.

Supt John Gordon of Lucan Garda station said the victim and the two men he was with were travelling in a a white Toyota Aygo, with a 12 D registration.

When it pulled into the halting site at about 3pm the men Coakley-Hutch was with got out of the car and went to an area of the site where a number of horses are kept in a pen.

Supt Gordon said the two men heard “a number of loud shots or bangs”. They ran back to the car, which had moved a short distance, and found Coakley-Hutch injured.

Gardaí arrived within minutes and tried to revive the wounded man but with no success.

A black VW Golf, 05-CE-1675, was seen leaving the area moments later. It was found on fire at nearby Crag Avenue, at an industrial estate, soon after the shooting. Gardaí believe it had been used by the killers.

Just before 6.30pm a black Toyota Avensis, 04-D-72956, was found burnt out on the north side of Dublin; at Snowdrop Walk, Darndale, in an area known locally as the ‘peace line’.

“We are requesting the public’s assistance to help us locate the movement of those vehicles,” Supt Gordon said.

“In particular those people who may have dashcams, or who may have seen the movement of the vehicles prior to 3pm yesterday afternoon and up until 6.25pm or thereafter at Snowdrop Walk in Darndale,” he added of potential witnesses being sought.

Garda sources said the killing had all the hallmarks of a well-planned attack, adding the victim was most likely being watched for some time.

The area was sealed off immediately when the gardaí arrived. The victim was pronounced dead at the scene. A postmortem is expected to show he died of gunshot wounds.

If the murder is feud related it will increase fears that a fresh round of bloodletting is now underway.

The feud had been quieter last year as the Garda Operation Hybrid, a major drive to thwart the gangs, in place.

However, three men still lost their lives last year and now Operation Hybrid is under threat from cuts to Garda overtime, which the Government has warned is “out of control”.

All of the murders, bar two, in the Kinahan-Hutch feud have been carried out by the Kinahan side.

The feud began in September, 2015, in Spain when drug dealer Gary Hutch was shot dead. He had tried to kill one of the Kinahans in Spain but failed.

His family back in Dublin attempted to agree a deal with the Kinahans to spare his life. Though agreement had been reached and a large sum of money paid, the deal was reneged on and Gary Hutch was shot dead.

Since then the Hutch family and their associates in Dublin have been under threat and a large number of them, including Coakley-Hutch, have been warned their lives were at risk.

Garda members have been stationed permanently on the streets where Hutch family members live in the north inner city. Those patrols, under Operation Hybrid, were stepped up after yesterdays killing.

Coakley-Hutch’s father, Derek, died by suicide nine years ago. His mother Noeleen was awarded €28,000 by the courts last Friday in a personal injuries payment following a car accident in 2014.

Mr Justice Raymond Groarke said she was an “honest lady” but attracted misfortune, having heard of a series of car accidents she had received damages for.

“She seems to have an attraction for misfortune and the moral of the story is don’t travel in a car with Ms Coakley, ” he said.

She arrived at the scene of her son’s murder yesterday and was in a distressed state.