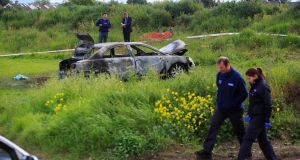 Concern is mounting in Garda circles over the surge in gun violence linked to a criminal gang in north Dublin suspected of the gun murder of Hamid Sanambar (42) in Dublin on Tuesday.

The Iranian national, who had been granted asylum in the Republic, was closely associated with friends Seán Little (22) and Jordan Davis (22) shot dead last week as well as Zach Parker (23) who was shot dead in January.

All four men were linked to a drug gang based in Finglas, north Dublin, and it is possible members of that gang were responsible for all four murders.

That surge in violence comes at a time when the Kinahan-Hutch feud is ongoing. Another feud in Drogheda, Co Louth, has also seen three men left with life-changing injuries after efforts to kill them were botched.

And there are two other feuds, in the Dublin suburbs of Finglas and Mulhuddart, between rival factions there.

Mr Sanambar, a suspect gangland killer himself, was shot dead outside the family home in Coolock, Dublin, of Mr Little and gardaí believe he was living in the area himself with his partner.

There was a heavy Garda presence at the scene on Tuesday night, which remained sealed off. Members of the Garda Technical Bureau carried out a forensic examination of the property and surrounding area.

Several metres up from the property a large concentration of shattered glass could be seen on the road, possible because of a misfired shot inside a vehicle.

One local said mourners had been calling to the house to pay their respects to Mr Little’s family in recent days.

One woman said she saw three men in balaclavas emerge from a car. A man and a woman walking their dog said they had seen the Garda helicopter overhead.

“It’s the family house of the man who was shot last week,” said the woman. “I know them to see. I run the shop nearby so they’d be in and out. They’re a nice family.

“I’m very fond of them and they’re here years. That’s the third tragedy in a week now for the same group because they were all friends. I believe the chap killed today was friends with Seán. It’s crazy though. Your nerves would be gone. I think I’ll move away.”

Another woman said she lived nearby and had walked up to the scene as she knew the two men who were killed last week. “It’s desperate. Disgraceful what they’re doing. We saw it on the telly so we said we’d walk up.”

Two other women said they had lived in the area all their lives. “We grew up around here and we never had anything like this. A great community it was. Talk about Kilmore West? It’s like the wild bleedin’ west around here now.”

1 Tuberculosis vaccine ‘potential game-changer’ in Covid-19 fight
2 Coronavirus Q&A: How to shop safely during Covid-19
3 Coronavirus: Situation in Ireland ‘misrepresented’ because of limited testing
4 Coronavirus: Efforts to tackle nursing home outbreaks to be ramped up
5 We need to cancel the Leaving Cert and give students predicted grades
Real news has value SUBSCRIBE