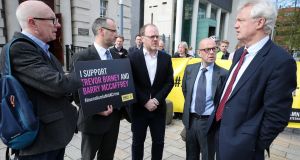 The police officer responsible for the arrests last year of two journalists who made a documentary about the 1994 Loughinisland massacre was concerned that lives had been “put in danger for merely having the misfortune of being involved in terrorist atrocities at whatever level”, the Belfast high court heard on Tuesday.

The sentiment was expressed in a notebook of retired British police officer Darren Ellis, who was called in by the Police Service of Northern Ireland (PSNI) to investigate the “theft” of documents relating to the sectarian massacre of six men, and their use in the 2017 documentary No Stone Unturned.

Barry McDonald QC, acting for one of the journalists, described Ellis’s stance as “a staggering proposition” and evidence of the “warped mindset” of the police officer driving the process.

The disclosure of the notebook was made by McDonald in the course of a judicial review brought by the journalists, Trevor Birney, the producer of the film, and Barry McCaffrey, the reporter, into the legality of their arrests last August under warrants which saw large numbers of police officers raid their homes and the offices of Fine Point Films, which is run by Birney.

Police seized large volumes of material, most of it unrelated to the Loughinisland investigation. None if it has been returned.

McDonald, representing Birney, told the Lord Chief Justice, Sir Declan Morgan, sitting alongside Mr Justice Seamus Treacy and Mrs Justice Siobhan Keegan, that the operation was “nothing less than outrageous” and that the warrant for it should not have been granted.

“This was the kind of operation associated with a police state rather than with a liberal democracy that has laws to protect journalists so that they can fulfil their proper function of holding governments to account,” he said.

He said the searches were to get at journalistic sources, and the ulterior purpose was to intimidate journalists.

The court heard that in the course of making No Stone Unturned, which was directed by Alex Gibney, the film makers had informed PSNI deputy chief constable Steve Martin that it was their intention to name members of the gang which allegedly carried out the atrocity, based on evidence presented in the film, some of it drawn from a document sent anonymously to McCaffrey in 2008.

They also made use of a 2017 report by the police ombudsman, Michael Maguire, into the police investigation of the atrocity. This found “catastrophic failings” and “clear evidence” of collusion between the police and the murderers.

The film-makers also sent letters offering the right of reply to those they intended to name. McDonald said that it was open to the police to ask the journalists not to do this, to warn the suspects, or to seek injunctions to stop the film from being shown. The suspects had already been named in a letter sent to an SDLP councillor.

McDonald said police had gone to the man named as the chief suspect to solicit statements to support the suggestion that his right to life under the European Convention on Human Rights had been compromised.

The suspect said that he was “fearful” and “could not work”, claiming 90 per cent of his business had been in nationalist areas.

McDonald said Ellis, of Durham Constabulary, was “a man on a mission” against the ombudsman and investigative journalists, who had “put words in the mouth of a suspect”.

The judicial review hinges on the decision by Mr Justice Neil Rafferty to allow the police to arrest the journalists and raid their homes and office. He did so following an application by the police.

During the hearing which led to his decision, he asked the police if this was “an exercise in shooting a crow so as to ensure that other crows don’t land”. Police denied this but McDonald said on Tuesday that this was “exactly what this is”.

Lawyers for Birney and McCaffrey contend that the police should instead have served a production order on the journalists requiring them to produce the material sought by the police.

However, McDonald, and Gavin Millar QC, acting for McCaffrey, also argued that the police had not given proper regard to legal protections afforded in the UK to journalists allowing them to protect their sources. Millar said that journalists were also protected in relation to the use of confidential sources by article 10 of the European Convention, and by their obligations under the National Union of Journalists’ code of conduct.

Representing the police, Peter Coll QC said the prosecution was at an early stage and “other potential offences” might emerge. He admitted that Mr Justice Rafferty had not been taken through legislation relevant to the granting of warrants in relation to investigative journalism. *

Lord Chief Justice Morgan told him that he had to deal with the evidence put before Justice Rafferty and not on other matters.* Coll said that the Official Secrets Act had been engaged for the purpose of getting the warrant. He also referred to the importance the police attached to the management of informants. It was “absolutely essential” that their identity be protected.

No one has been convicted in connection with the Loughinisland murders, which were carried out during a televised World Cup match in the Heights Bar in Loughinisland.

Families of some of the men who died were in court on Tuesday. Emma Rogan, whose father, Adrian, was killed, said they were “shocked but not surprised” to hear that the police operation against the journalists was motivated by the desire to protect the rights of those who “merely had the misfortune of becoming involved in terrorist atrocities”.

Aidan O’Toole, who was serving the bar on the night of the atrocity, and who survived his injuries, said he was “just devastated”.

The case is expected to finish on Wednesday.