Judge directs jury to acquit Seán FitzPatrick on all charges

Sean FitzPatrick, the former chairman of Anglo Irish Bank, makes no comment as he leaves court after he was acquitted of all charges against him. Video: Colm Keena 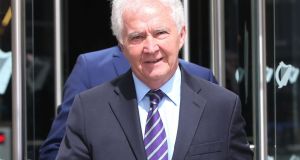 Former Anglo Irish Bank chairman Seán FitzPatrick will not face any more criminal charges, lawyers for the DPP have said.

His 127 day long trial at Dublin Circuit Criminal Court ended officially Wednesday morning when Judge John Aylmer told the jury of his decision, revealed in court Tuesday, to direct an acquittal of all 27 charges.

Mr FitzPatrick (68) of Whitshed Road, Greystones, Co Wicklow had denied misleading Anglo’s auditors about multi-million euro loans linked to him and his family.

Prosecuting barrister Dominic McGinn SC told Judge Aylmer that six other charges of alleged false accounting between 2002 and 2007 had been previously severed from this indictment during the first trial by Judge Mary Ellen Ring.

Mr McGinn said that the DPP was now dropping these charges so Mr FitzPatrick will not face trial on these. There are no other outstanding matters relating to the former bank executive.

Outside the court house Mr FitzPatrick and his daughter Sarah were met by a large scrum of photographers and journalists.

Asked if he would be celebrating, Mr FitzPatrick told the press pack: “That was last night”.

On Tuesday morning Judge Aylmer gave a lengthy ruling in which he strongly criticised the investigation by the Office of the Director of Corporate Enforcement (ODCE) into the annual practice of refinancing loans linked to Mr FitzPatrick.

He said that because of issues in the investigation, including the “extraordinary” shredding of documents by the ODCE investigator and the coaching of witnesses, there was a real risk to Mr FitzPatrick of an unfair trial.

He gave his ruling on Tuesday in the absence of the jury, which had been told to return to court on Wednesday.

Judge Alymer told the jury that he had made a decision that the prosecution had not established a sufficient case to go to the jury.

He told the jurors he was aware that they had given over eight months of their life to the trial process and he wanted them to have a full understanding of his decision to direct them to acquit.

He said that the investigation fell short of that which the accused is entitled and that there were a number of shortcomings. He said the shortcomings in evidence for each of the charges meant there was an insufficient case.

At the start of the trial last September a specially enlarged jury of 15 was empanelled because the expected length of the trial, which was due to last three months.

Since then two jurors were excused because of personal reasons so 13 jurors were left this week. The law states that at the end of the trial a jury of no more than 12 can return a verdict so on Wednesday morning one more juror had to be excused by a random selection.

This was done by the court registrar who picked a name from a biscuit tin. Judge Aylmer said that if the person picked was the current jury foreman the remaining 12 would have to appoint another foreman before returning the directed acquittals.

Judge Aylmer thanked the jurors for their attendance and said he thought it quite extraordinary that the court managed to keep 13 after eight months.

He said he expected that some of the jurors would be disappointed by how “it has panned out”.

“I wish to emphasise that a trial cannot proceed without a jury and you are an essential part of the process,” he told them.

The prosecution alleged that amount of loans connected to Mr FitzPatrick was artificially reduced for a period of two weeks around the bank’s financial end of year statement by short term loans from other sources, including Irish Nationwide Building Society.

Described as “refinancing” this practice was also known as “bed-and-breakfasting” or “warehousing”, as the loans would be allegedly put into short term storage. The State alleged that the former director was obliged to disclose the full extent of his loans to the bank’s auditors Ernst & Young and instead he had concealed them.

After his arrest in 2010 Mr FitzPatrick denied to investigating gardaí­ from the Garda Bureau of Fraud Investigation that he had ever sought to conceal the multi-million euro loans.

He told detectives that there was no financial benefit to him, his family or the bank in the annual refinancing of some of his loans.

Mr FitzPatrick had pleaded not guilty to 27 offences under the 1990 Companies Act. These included 22 charges of making a misleading, false or deceptive statement to auditors and five charges of furnishing false information in the years 2002 to 2007. The DPP withdrew nine of these charges earlier this month after conceding there was insufficient evidence for those.

The prosecution came on foot of an investigation by the ODCE that began shortly after the full size of Mr FitzPatrick’s personal loans emerged in December 2008.

The loans were used to finance development of shopping centres, hotels and offices. The revelations led to Mr FitzPatrick resigning as chairman.