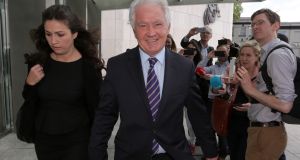 Former chairman of Anglo Irish Bank Seán FitzPatrick spent a considerable amount of time over the past three years in the criminal courts of justice on Dublin’s Parkgate Street.

He was twice tried on charges of misleading Anglo’s auditors, with both of the trials collapsing before the charges went to the jury, and had earlier faced charges to do with the so-called Maple 10 loans, where he was found not guilty by the jury.

There are no further charges pending against the former multimillionaire banker and his time in the criminal courts system comes to an end on Wednesday when the jury will be told to acquit him of all charges in relation to the misleading of Anglo’s auditors.

The trial that just ended sat for 126 days, since September. The busy court building plays host to people facing a wide range of charges, from minor drugs offences, to murder.

Over recent years the former banker who was, before the bust, credited with running one of the world’s most successful banks, would regularly be seen in the courthouse cafe sitting alongside people in tracksuits awaiting trials on minor offences.

It was not unknown for some of the other defendants attending the building to greet Mr FitzPatrick by name and wish him well.

The former bankrupt, who was on legal aid for the most recent trial, was invariably accompanied by public relations adviser Brian Harmon.

Irish law stipulates that legal arguments over what evidence can be heard in a trial cannot begin until a jury has been empanelled, even though the jury must be absent for the arguments. In the trial that has just ended, more than half the trial days involved legal argument in the absence of the jury. It also involved regular interruptions. Mr FitzPatrick attended all sittings.

He took an interest in the other trials that were under way in the building. One day he introduced himself in the cafe to Offaly doctor Bernadette Scully, who was being tried for the manslaughter of her 11-year-old daughter, Emily Barut, and wished her well. The jury found her not guilty.

Judge John Aylmer offered Mr FitzPatrick the opportunity not to attend today’s sitting, when the jury will be instructed to acquit the defendant on all charges. Mr FitzPatrick said he would attend.

Born in Bray, Co Wicklow, in June 1948, Mr FitzPatrick was the son of a dairy farmer and a civil servant.

When he was 18 he moved to London where here worked on building sites before returning to UCD to study commerce and then accountancy.

A stint in an accountancy firm ended when he got a job in a small Dublin-based bank called the Irish Bank of Commerce (IBC). He soon rose to the position of financial controller.

In 1980 IBC bought Anglo Irish Bank and Mr FitzPatrick was tasked with finding a chief executive to run the new acquisition. Instead he applied for the job himself and was hired. At 32 he was the chief executive of a national bank.

He was prepared to take a chance on people and helped many business leaders, most notably a young Denis O’Brien, on their way to success.

In 2005, Mr FitzPatrick stepped down as chief executive of Anglo to become its non-executive chairman. Among his more high-profile roles was a seat on the board of Aer Lingus, the Smurfit Kappa Group, food company Greencore and the Dublin Docklands Development Authority.

His fortune at one stage was estimated to be more than €200 million.