Targeting young girls is shocking even by standards of contemporary terrorism

Analysis: Fact that it was a bombing rather than a low-tech attack will alarm police

British prime minister Theresa May delivers a statement outside 10 Downing Street in the wake of a terrorist attack at a concert in Manchester. 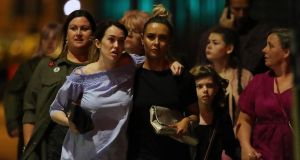 The cruelty of Monday night’s attack in Manchester, targeting an audience made up mostly of young teenage girls, is shocking even by the standards of contemporary terrorism. But it is the fact that it was a bombing rather than a low-tech attack which will cause most alarm among Britain’s counter-terrorism officials.

Apart from the bombings in Paris in 2015 and Brussels last year, most recent terror attacks in Europe have required little planning or co-ordination. Some, as in Westminster this year and in Nice and Berlin last year, have involved the use of a vehicle to mow down pedestrians. Others used guns or knives, or as in the murder of fusilier Lee Rigby four years to the day before the Manchester Arena bombing, a meat cleaver.

The attack in Manchester does not appear to have been as sophisticated as those in Brussels and Paris but even the most rudimentary bombing requires preparation. The attacker must acquire or manufacture explosives and a detonator and have enough expertise to detonate the device.

Britain’s counter-terrorist intelligence is better than most of its European counterparts but it is impossible to keep all known radicals under constant surveillance. Police on Tuesday identified the Manchester suicide bomber as 22 year-old Salman Abedi, who was born in the city.

Abedi’s parents moved to Britain from Libya to escape the regime of Muammar Gadafy, joining the large Libyan diaspora in Manchester. If Abedi was already known to the security agencies, they will be alarmed that he was able to assemble a bomb and successfully detonate it without attracting attention. They must establish if he is part of a broader network and, more urgently, if further, co-ordinated attacks are planned or likely.

Investigators will scour Abedi’s phone and online communications to build up a detailed pattern of his movements in recent weeks and to identify any possible accomplices. A 23-year-old man was arrested in Manchester on Tuesday morning in connection with Monday night’s attack but police gave no details of what role he might have played.

More armed police have been deployed in Manchester and other British cities, partly to reassure the public in the wake of the bombing. The Metropolitan Police said on Tuesday that they would review security ahead of a number of weekend events, including the FA Cup and Aviva Premiership finals.

There will be more police around key locations but also at smaller venues which do not usually receive such attention. But the authorities know that, in an open, democratic society, it is impossible to ensure total security. Transforming every theatre, cinema and concert venue in the country into airport-style fortified enclosures would not only be prohibitively expensive but unwelcome to most people in Britain.

The authorities can derive some satisfaction from the fact that the regional plan for an emergency response to an attack in Manchester worked exactly as it was designed to. Police, hospitals, ambulance services and other first responders all played their allotted role so that the injured were treated quickly, the area around Manchester Arena was secured and the investigation got under way without delay.