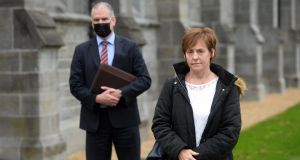 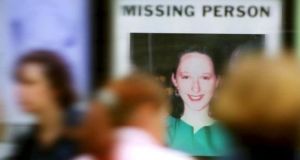 In 1999, Garda posters were put up seeking the public’s help in locating the Kilkenny woman. Photograph: Bryan O’Brien 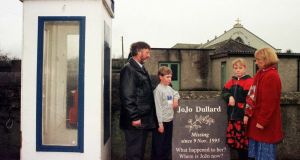 Jo Jo Dullard’s sister Mary Phelan, right, with her husband Martin and their children with the memorial stone besides the phone box that Jo Jo made her last call from. Photograph: John Cogill 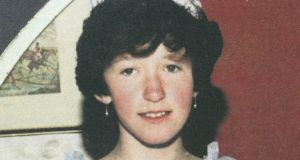 Josephine ‘Jo Jo’ Dullard has been missing since 1995 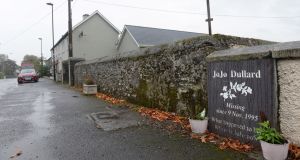 JoJo Dullard, the 21-year-old Kilkenny woman who disappeared without trace 25 years ago, is dead and “met her death through violent means,” gardaí have concluded.

The disappearance of Ms Dullard, who was last seen in Moone, Co Kildare, is now being treated as a murder investigation with cold case detectives issuing a renewed appeal for information, including from those who may have given false statements in the past.

The classification of the case as a murder investigation comes about as a result of a review by the Garda’s Serious Crime Review Team (SCRT) which began in February.

A major part of their work was a “victimology and proof of life” analysis. This process allowed them to reasonably determine Ms Dullard is no longer alive and that she did not met her death through suicide, Det Supt McTiernan said.

“We can’t just upgrade to murder just on a gut feeling. We have to have a reasonable rationale that would show why we are categorising it as murder. The work that has gone into classifying it as that is substantial.”

He said that having carried out this work, gardaí are “quite satisfied that Jo Jo is dead and met her death through violent means.”

Ms Dullard enjoyed life, had plans for the future and was excited for those plans, he said.

“We are satisfied that now that JoJo came to harm in Moone and we are classifying this investigation as a murder,” said Kildare Superintendent Martin Walker.

Gardaí were reluctant to share any new information it may have gathered since February in relation to the investigation.

Supt Walker said there was no “silver bullet” that moved the investigation forward. He instead cited the “hard work” of the SCRT.

Det Supt McTiernan declined to comment on any new information it has received since February.

At a press briefing in Newbridge, Ms Dullard’s sister Kathleen Bergin made an emotional plea for help to “bring JoJo home.”

“After all these years we have known in our hearts and accepted that JoJo is no longer alive and we are hopeful that the team will be able to move the case along further and maybe, please God, find answers to our questions.

She appealed for people with information to “find it in your heart” to come forward. “We understand if fear has been holding them back. Please believe us. We just want to have JoJo brought home. You will not be judged.”

No one has ever been arrested in relation to Ms Dullard’s disappearance on the night of November 9th, 1995.

For years rumours circulated that she and several other missing women were the victim of a serial killer operating in the east of the country in the mid to late nineties. Today gardaí are sceptical of the theory; most of the missing women are now suspected to have been killed by someone known to them.

However this is not the case in Ms Dullard’s murder and no major suspects have ever been identified in her disappearance.

Ms Dullard had been socialising in Bruxelles Bar in Dublin on November 9th before starting her journey home to Callan in Kilkenny.

She missed the last bus to Callan so got a bus to Naas before hitching two lifts to Moone. At 11.37pm she called a friend from a phonebox in Moone to tell her she would be home soon and that a car had just stopped for her. That was the last time anyone heard from Ms Dullard.

At the time Ms Dullard was wearing blue jeans, black boots and a small rucksack. She was also carrying a black Sanyo cassette player and matching headphones.

On Monday, gardaí said they are particularly interested in anyone who might have found the portable cassette player or been given it is suspicious circumstances, perhaps as a Christmas gift.

They are also keen to speak to anyone who was hitch hiking around Moone, Co. Kildare at the end of October 1995 or the start of November 1995, or anyone who picked up a hitchhiker during that period.