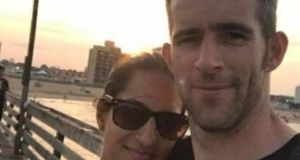 Mr Byrne (right) has said previously he was ‘embarrassed’ for both Ireland and the US that his previous offences had to date prevented him from securing permission to remain in the US.

An Irish man who was imprisoned for a period in the US as part of a crackdown on illegal immigration has launched a fresh effort to secure legal status there.

Keith Byrne (37), from Fermoy, Co Cork, was arrested in July as an illegal immigrant facing deportation.

However, he was released from detention in Pennsylvania after two weeks following a court ruling. He was reunited with his American wife and three children.

He remains in the US, where he has lived as an illegal immigrant for over a decade. His lawyers have now begun a process that will effectively mean his application for permanent status was being examined again.

Mr Byrne has claimed his cannabis possession history in Ireland has derailed his long-running efforts to secure legal status in the US where he wants to remain with his family.

He has said previously he was “embarrassed” for both Ireland and the US that his previous offences had to date prevented him from securing permission to remain in the US.

His lawyer Tom Griffin told The Irish Times that the US Citizenship and Immigration Services reopened Mr Byrne’s case on August 14th and had allowed a 30-day response period.

That response was filed in recent days and Mr Griffin said that meant Mr Byrne’s application for permanent status was now “getting a second look after a prior denial”.

“We’ve put forth legal argument as to his eligibility, as well as a hardship waiver to overcome any bars to admission based on his offense history in Ireland,” Mr Griffin said.

He added that as a result of an agreement reached with the immigration authorities the risk of Mr Byrne being arrested for deportation again had been lifted for now.

“He will not be a priority for arrest and removal until he has exhausted his attempts at legalising his status,” Mr Griffin said.

He has been attempting to regularise his immigration status through the legal system for several years but his drugs record from Ireland for cannabis possession has complicated his efforts.

Mr Byrne said he was shocked and confused by his arrest in July because he had “been fighting for a long time to make things right”.

4 Trinity professor claims she was unfairly disqualified from Provost election