Inmates should be among first to get Covid-19 vaccine, says prison service 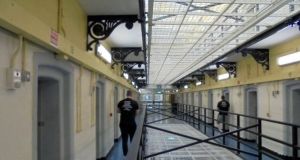 A total of 22 prisoners have contracted the virus to date

The Irish Prison Service has requested the country’s 3,800 prisoners be among the priority groups to receive a Covid-19 vaccine.

Prison staff are expected to get some sort of priority access to a vaccine as they are classified as front-line workers, but no decision has been made regarding the prisoner population.

It is understood the prison service’s infection control team has contacted the National Public Health Emergency Team to request prisoners be given any approved vaccine ahead of its distribution to the general population.

The infection control team cited the confined nature of prison environments and the high rate of immunosuppressive conditions among the inmate population, sources said.

A total of 22 prisoners have contracted the virus to date. A prison service spokesman said the majority of these cases involved people becoming infected in the community before entering prison.

A decision on when prisoners and other vulnerable groups will receive the vaccine is expected this week.

“Policy in relation to the order in which people should be offered vaccination is being developed as a priority in conjunction with the national experts on immunisation, and it is expected that Nphet will shortly finalise its advice to Government in this regard,” a Department of Health spokeswoman said.

The vaccination of prisoners has not yet featured in public discussions. It is understood healthcare workers and nursing home residents are likely to be at the top of any priority list.

Vaccinations are expected to start some time in January 2021. Any priority for prisoners is likely to cause some public upset as various groups lobby for access to what will initially be limited supplies.

According to a University of Oxford study, prisoners should be among the first groups to receive a vaccine to prevent further spread of the disease. It said prisons could act as a “reservoir” for Covid-19 due to the high numbers entering and leaving facilities.

“The prison population is generally at higher risk of complications from infection because of the increased prevalence of underlying health conditions, and the over-representation of marginalised groups that have been disproportionately affected by Covid-19,” it said.

Similar recommendations have been made by the American Medical Association.

“The State has a duty to protect the life and health of everyone in it,” said Fíona Ní Chinnéide, executive director of the Irish Penal Reform Trust.

Prisoners, as well as people in other residential settings such as mental health facilities, should be among the groups given priority access, she said.

“People in prison have no control over their environment. Measures to prevent the spread of the virus, such as hand hygiene and physical distancing, are less effective in crowded facilities where people live, eat, and sleep in close proximity.”

A vaccination campaign would also bring an end to the strict infection control methods in place in prisons including the ban on visits and cocooning for older prisoners, which Ms Ní Chinnéide compared to solitary confinement.