‘I have no confession to make, only that I didn’t do it.’

Petition for reprieve signed by 7,000 fell on deaf ears 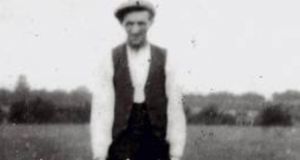 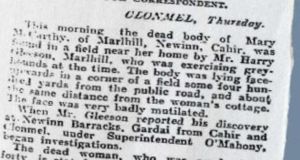 An extract from The Irish Times report on the body find

The full and final exoneration of Harry Gleeson has been a long time coming.

On the morning of November 22nd, 1940, he discovered the body of Moll Carthy lying on a piece of land he had been ploughing the evening before on the farm he managed for his uncle in New Inn, Co Tipperary. She had suffered horrific gunshot wounds to her face.

After making the grim discovery, he walked to the local Garda station to raise the alarm. Almost immediately the 38-year-old New Inn blow-in was identified as the prime suspect, the only suspect really.

Within weeks he was charged and within months he was dead and buried in Mountjoy Prison.

Gleeson was born in Holycross in 1903 into a family of 12 children. As a teenager he was forced to move from his home to New Inn to work as farm manager for a childless uncle called John Caesar. He earned no wage and spent two decades at the beck and call of the Caesars of Tipperary.

Moll Carthy’s life was, if anything, tougher. She grew up in abject poverty – hardly unusual for the time. What was, however, most unusual was her lifestyle once she came of age. She had seven children with seven different men and never married.

Six of the seven fathers lived locally and as her children grew up, their neighbours would stare at them curiously, trying to work out who was the father of each. The father of her seventh child, born six months before she died, was never identified. That was to prove crucial in the trial to come.

According to O’Cathaoir, Moll’s unorthodox lifestyle was “a source of tension, especially among the close relatives of the men who had fathered her children”. Her home was burned down once and she was frequently condemned from the pulpit. Multiple applications were made to have her children taken into care.

Then she was murdered.

The story went that Gleeson, motivated by a desire to inherit Caesar’s land and terrified rumours that he was the unidentified seventh father would spread and scupper his chance, had killed her.

Nine days after she was found he was charged with her murder. The State’s case was full of holes. The prosecution withheld information, encouraged some witnesses to lie and beat others while ignoring the accused’s alibi. Gleeson had no chance and he was convicted and sentenced to death.

His junior counsel, Seán MacBride, appealed immediately and a petition for reprieve was signed by 7,000 people but fell on deaf ears. While he could not save his client from the gallows, MacBride subsequently campaigned successfully for the abolition of capital punishment.

MacBride was the last person to visit Gleeson in Mountjoy on April 23rd, 1941, the eve of his execution. “He asked me to let his uncle and aunt and his friends know that he did not mind at all dying as he was well prepared, and that he would pray for them as soon as he reached heaven,” MacBride wrote.

Gleeson said: “I will pray tomorrow that whoever did it will be discovered, and that the whole thing will be like an open book. I rely on you, then, to clear my name. I have no confession to make, only that I didn’t do it.”

Maybe now, at long last, he can rest in peace.

Impact of coronavirus ‘overwhelming’ but for public-health controls in Republic

1 ‘When I look at the viral loads we find in elderly people, it is mind boggling’
2 Chief medical officer urges people not to visit hardware stores
3 Impact of coronavirus ‘overwhelming’ but for public-health controls in Republic
4 Republic’s Coronavirus death toll rises by 28 as confirmed cases up by 500
5 Coronavirus: More ‘striking’ evidence BCG vaccine might protect against Covid-19
Real news has value SUBSCRIBE