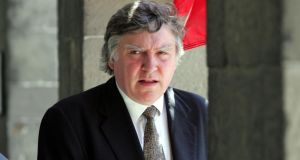 John Rogers SC, for the woman’s father, argued the Eighth Amendment to the Constitution, which sets down the equal right to life of the mother and the unborn, was not applicable to this case. Photograph: Frank Miller

The High Court has been told it would be “grotesque” to keep a brain-dead pregnant woman on life support given the chances of the baby being born alive.

The three-judge court will hear legal submissions this morning in the case of the woman, who was declared brain-dead on December 3rd, but remains on life support due to uncertainty about the legal consequences of switching it off.

The woman’s father told the court her family were united in wanting the treatment stopped and to bury her with dignity. “My daughter is dead. The chances of the foetus surviving are minimal, we have been told,” he said.

The woman’s partner said he agreed with this.

The special out-of-term hearing, involving 17 lawyers, heard from seven consultants in obstetrics, neurology and intensive care. None argued that life support should be maintained. A former master of Dublin’s Rotunda Hospital, Dr Peter McKenna, said doing so would mean “going from the extraordinary to the grotesque.”

The court heard that the woman’s brain was rotting, that she was suffering from an infection and that her condition was deteriorating rapidly.

Consultant obstetrician Dr Peter Boylan said the viability of a foetus was generally regarded as 24 weeks, but only 25 per cent of babies born then survived. Of those, only 15 per cent were not disabled.

John Rogers SC, for the woman’s father, argued the Eighth Amendment to the Constitution, which sets down the equal right to life of the mother and the unborn, was not applicable to this case. The purpose of the amendment was to protect the unborn from abortion and that was not at issue here, he said.

Conor Dignam SC, representing the interests of the unborn, said that if the medical evidence established no prospect of the unborn being viable if life support was maintained, the court should declare it lawful for those measures to be withdrawn.

A consultant neurologist who treated the woman said he had seen “dreadful things” in his professional life but never a situation like this.