Mourners asked to keep Valdez family in their thoughts 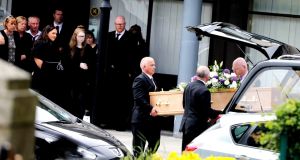 The man who abducted and murdered Jastine Valdez last week has been cremated following a short service in south Dublin on Saturday afternoon, leaving his family, in the words of his father, to deal with “a nightmare”.

There was a small Garda presence in front of Mount Jerome Cemetery in Harold’s Cross as a hearse brought Hennessy’s remains to the chapel. The remains had been released by the State Pathologist’s office on Thursday following a post-mortem.

Hennessy’s wife Nicola, father Mick and mother Mary were among the roughly 100 people who filled the small Victorian chapel beside the crematorium. A picture of the man was placed on top of the coffin during a service which lasted less than 15 minutes.

The ceremony focused on the grief and shock of the Hennessy family rather than on the life of the man who murdered 24-year-old Ms Valdez after dragging her into his car last Saturday in Enniskerry, Co Wicklow.

There was also no mention of how Hennessy met his death; shot by a Garda detective on Sunday evening as he sat in his car while armed with a Stanley knife. The bullet hit Hennessy in the shoulder before ricocheting into his torso and killing him instantly. A Garda Ombudsman investigation into the shooting is ongoing. Gardaí are also trying to determine if Hennessy was involved in any previous attacks on women in the area.

Hennessy’s father, Mick, told the funeral service the family was living a “nightmare”.

“I fix things. That’s my job. I go to work and I fix things,” said Mr Hennessy who works as mechanic.

“But for the past week I have been waking up in the morning to see my darling sweetheart wife broken. She’s broken. And I can’t fix her.

Mr Hennessy asked mourners “to keep the other people who are involved in this tragedy to the forefront of your minds and your prayers.”

He thanked those who offered support to the family over the last week whether it was “a shake of the hand, a cuddle, a peck on the cheek or just words of encouragement.

The funeral celebrant said Ireland “as a nation is praying for the Hennessy and Valdez families every day and I know they will continue to.”

“The unfolding of these tragic events over the past week for the Hennessy family has touched us all.

There are no words to describe the awful pain, the enormous grief and the nightmare that they have been living,” she told mourners.

“So your support here today is a tribute to them in their hour of need, in their anxiety and in their terrible sorrow.”

She continued: “There are no words adequate, no words that come near to softening the blow when we are faced with the shock of a sudden and unexpected death. But how much more when that death is surrounded by so much trauma for all concerned.”

Before the service concluded and the remains cremated, she asked that people say a prayer for the Hennessy family every day.

“If you don’t know a prayer just say God help the Hennessys please.”

1 No time limits and no pre-booking: what the unpublished pub reopening guidelines reveal
2 Covid-19 may spread more easily in schools than thought, US report warns
3 'There is no way I would go' - Irishman in Malta cancels trip home as two weddings put off
4 Teenage boy dies at Powerscourt Waterfall in Co Wicklow
5 Gardaí surrender 13 people to Polish police
Real news has value SUBSCRIBE