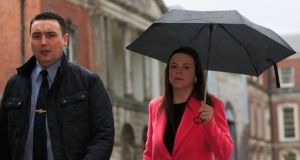 Garda Keith Harrison has told the Charleton tribunal that the Garda Pulse database was “was similar to a social media site” a decade ago.

Gda Harrison said there was a widespread practice at the time of gardai looking people up on Pulse when they shouldn’t have been, but this had since ceased.

Representing the Garda Commissioner, Mícheál P O’Higgins SC, said that Gda Harrison had looked up his partner Ms Marisa Simms in May 2008, before their relationship began and while he was still stationed in Athlone.

The barrister said this would mean Gda Harrison’s explanation that he was looking up Pulse to see if other garda officers were checking on Marisa and his relationship made no sense.

“It is possible at that time we had some contact at that time and out of a sense of curiosity,” Gda Harrison said.

Gda Harrison said that in 2011 when he began a relationship, he “had a fear that somebody was going to find out” and he would be moved from Buncrana Garda station.

Martin McDermott, a brother of Ms Simms, was facing homicide charges at the time following the death of another Buncrana-based garda, Gary McLoughlin, in a car collision.

Gda Harrision said he felt he was “under surveillance”, and he believed he was “closely monitored by senior colleagues.”

“I simply wanted to see who was looking at us. That was it,” Gda Harrison said.

“The checking up is your checking up. Nobody else,” tribunal chairman Peter Charleton said.

Gda Harrison said he had since learned that it was possible to check Pulse entries using “confidential cover”, and this did not leave any electronic fingerprints.

Mr O’Higgins said that in 2014, Gda Harrison was keen to hitch his wagon to Sgt Maurice McCabe’s train, and have his complaints dealt with by a commission or tribunal.

Gda Harrison said he was not Maurice McCabe. He was his own man, and made up his own mind.

Mr O’Higgins also said that because of Gda Harrison, Ms Simms was now “bound to this ridiculous story” that she misunderstood what he meant when he said she would get burned in an argument.

Mr Desmond Dockery, on behalf of Sergeant Brigit McGowan said that as a garda, Keith Harrison knew domestic abuse was the bread and butter of gardai on the beat throughout Ireland, and they were obliged to report child welfare cases to Tusla.

The barrister said there was no evidence of inappropriate contact between Sgt McGowan and Tusla in relation to Gda Harrison and Ms Simms.

Mr Dockery said the fact Ms Simms recorded video on her phone of an incident in August 2013 where Gda Harrison was blocking her exit and she had to lock herself in a car when she went to collect things from his house in Churchill meant she was afraid of him.

Gda Harrison said he did not recall the incident.

The video was shown, following which the tribunal chairman asked Gda Harrison if he was the person shown. Gda Harrison said he was, although he did not recall the incident.

Gda Harrison said it was not correct that his evidence about text messages Ms Simms sent in 2013 regarding threats to burn was an invention tailored to match what Ms Simms said in evidence earlier in the week.

Ms Mary O’Donnell, a receptionist at An Chuirt hotel in Gweedore, said she received a telephone call from Keith Harrison the night of Ms Simms’ sister’s wedding in October 2013. He said he was concerned about his girlfriend, and wanted to know if she was in the hotel.

Ms O’Donnell said she thought if the caller was Ms Simms’ boyfriend, he would know if she was staying.

She said that Mr Harrison then identified himself as a garda, and said he was concerned about Ms Simms’ safety, as there had been a threat to his life and she was being threatened as well.

Ms O’Donnell said that afterwards, she spoke to Ms Simms mother, Rita McDermott, who said her daughter was under threat from Keith Harrison.

Ms McDermott insisted that Mary O’Donnell should report the call to local Gardai.

Det Garda David Moore called the next day to the hotel and spoke to Ms O’Donnell.

Ms O’Donnell said that the detective was very nice and very polite, but she did not want to make a statement.

Ms O’Donnell said that the note recorded by Detective Moore said Gda Harrison indicated at the start of the call who he was, but in fact he had not identified himself as a garda until Ms O’Donnell said the information he was seeking was confidential.

Ms O’Donnell said she felt uncomfortable making a statement, and that she was “being used”.

“I couldn’t quite put my finger on it, and I said it to Detective Moore,” Ms O’Donnell said.

She said that she would not have called the local garda station about Gda Harrison if it hadn’t been for the McDermott family making her do it.

Asked who she thought was “playing” her, Ms O’Donnell said “I just felt, I was appalled, I have no idea on whose behalf I was being played.”

Earlier Garda Harrison told the Charleton tribunal that he believes visits to his home by a social worker were due to inappropriate contacts with child welfare services by members of An Garda Síochána.

In the current module, the tribunal, chaired by Mr Justice Peter Charlton, is looking at contacts between gardaí and the HSE/Tusla relating to Garda Harrison, which he alleges amount to an abuse of power.

Garda Harrison said he was told by his partner, Marissa Simms, that social worker Donna McTeague apologised for having to make a home visit in February 2014, and said the visit was carried out because her superior had been in contact with An Garda Síochána.

The previous October, Ms Simms had made a statement of complaint to gardaí about Garda Harrison, which she withdrew in January 2014.

Garda Harrison said the conversation between Ms Simms and Ms McTeague did not take place in his presence, but Ms Simms had told him about it afterwards. He said he believed then and still believed it had taken place.

The garda said that Ms McTeague did her job professionally, and he was not criticising her.

The tribunal chairman asked Garda Harrison if he was saying that Sgt Brigid McGowan, the Garda/HSE liaison officer, had “leant on” the social workers to make a home visit.

“What I’m saying is the team leader had a conversation with Sgt McGowan that was relayed to Donna McTeague,” Garda Harrison said.

Mr Marrinan said Ms McTeague said she never told Garda Harrison and Ms Simms there would be no more meetings after she met the couple on 7 February 2014.

She said she never had any conversation with her superior about having to make another home visit because the gardaí had been in contact, and to her knowledge no such conversation ever took place.

“Perhaps I should have made that clearer, but I’m making it clear, that’s what I was told,” Garda Harrison said. He said he was not tailoring his evidence to fit with that of Ms Simms.

“Marisa may not recall the conversations. It was my belief at the time and it is my belief now,” Garda Harrison said.

The chairman asked Garda Harrison if he understood that ascribing to somebody something they did not say or do, was a wrong thing to do. Garda Harrison said he did.

Paul Anthony McDermott SC on behalf of Tusla, asked Garda Harrison why he did not request his records from Tusla, which would have cost only the price of a stamp.

In a letter on 27 February 2014 after the last home visit, Garda Harrison and Ms Simms were informed they could request their records under Freedom of Information and Data Protection laws, and make amendments to any errors.

Garda Harrison said this “would possibly have brought Tusla back into our lives, which we didn’t want.”

“I had concern over the contacts between Tusla and An Garda Síochána at that time,” Garda Harrison said. “We were relieved there was going to be no more contacts.”

When Mr McDermott asked the witness if he would take a final opportunity to withdraw the suggestion that a personal connection between Tusla and garda personnel was the reason for the home visits, Garda Harrison said he was told at an earlier meeting in HSE offices in St Conall’s hospital that there was “a close working relationship between An Garda Síochána and Tusla.”

Mr McDermott asked if Garda Harrison could see a difference between a “close working relationship” between Tusla and an Garda Síochána and the bald phrase “there was a relationship between them”.

“I am standing over that there was a clear reference to a close working relationship which I took as that,” Garda Harrison said.

Mr McDermott put it to Garda Harrison that he had made “a series of incorrect allegations about Tusla that clearly haven’t stood up to a moment’s scrutiny.”

“I haven’t made any allegations about Donna McTeague or Tusla but I have made allegations that there was improper incorrect contacts between the two organisations,” Garda Harrison said.

On Wednesday Ms Simms told the tribunal she accepts there is no basis for believing gardaí­ manipulated Tusla into investigating her family and children. She said she had previously believed there was an abuse of authority based on the fact that there was a “coincidence” in which she was contacted by Tusla shortly after she withdrew a statement making complaints against her partner, Garda Keith Harrison, in January 2014.

The tribunal resumes on Monday afternoon with further evidence from Gda Harrison.