Teen arrested after brick thrown through window at Pantibar 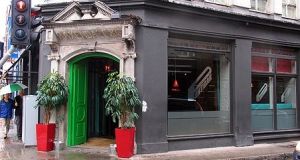 A spokeswoman for the Garda said the matter was being treated as a criminal damage issue. Photograph: Pantibar

A man in his late teens has been arrested after a brick was thrown the window of a popular Dublin gay bar on Friday night.

The incident occurred at Pantibar on Capel St at about 11pm. Gardaí attended the scene and a man was arrested nearby.

Bar owner Rory O’Neill (best-known by his stage name Panti Bliss) posted a photograph of the brick on Twitter which also featured a note in Irish, which read: “Piteoga amach as Eireann”.

Alongside the photograph, Mr O’Neill wrote: “A brick thrown through Pantibar’s window just now. No one hurt. It says in Irish ‘FAIRIES (fags) OUT OF IRELAND’. But we are Ireland.”

The Dublin LGBTQ Pride Festival is taking place on Saturday, and Mr O’Neill added that he hoped the public would enjoy the day. “Happy Pride everyone,” he said. “It’s going to be a great day tomorrow, full of Irish love and queer joy. Be thankful for it, cos some people have neither.”

A brick thrown through Pantibar's window just now. No one hurt.
It says in Irish "FAIRIES (fags) OUT OF IRELAND"

But we are Ireland

Happy Pride everyone. It's going to be a great day tomorrow, full of Irish love and queer joy.
Be thankful for it, cos some people have neither pic.twitter.com/AQe2YwXpvY

A spokeswoman for the Garda said the matter was being treated as a criminal damage issue.

“Gardaí are investigating an incident of criminal damage at a bar on Capel St at 11pm on June 29th,” she said.

“A man in his late teens was arrested near to the scene and taken to Store St Garda station. He has since been released without charged and a file is being prepared for the DPP.”

Figures released under the Freedom of Information Act last year showed there have been just five convictions for hate crime in the Republic in the last three decades.

The State has one piece of hate crime legislation, the Prohibition of Incitement to Hatred Act 1989.

The Act makes it an offence to create or distribute racist, homophobic or other discriminatory materials. Offenders face a maximum of two years in prison and a fine of €10,000.

According to documents released, there have been 44 prosecutions under the Act since 2000, of which five resulted in convictions.

The Courts Service said figures from before 2000 were not available. However, the Department of Justice said in 2000 that no convictions had been recorded before that date.

Anti-discrimination campaigners say the figures show the current legislation is not fit for purpose and that much broader hate-crime legislation is required at a time when racist incidents are on the rise.