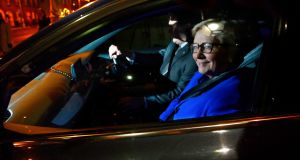 Former tánaiste Frances Fitzgerald was forced to resign amid questions about whether she knew about the aggressive strategy employed by Garda lawyers against Sgt McCabe. Photograph: Cyril Byrne

The Garda repeatedly consulted the Department of Justice about its legal strategy towards whistleblower Sgt Maurice McCabe, the Charleton tribunal has heard.

The revelations on Monday shed new light on the controversial events which brought the Government to the brink of collapse before Christmas. Former tánaiste Frances Fitzgerald was forced to resign amid questions about whether or not she knew about the aggressive strategy employed by Garda lawyers against Sgt McCabe at a previous inquiry.

Before Christmas, the Taoiseach and several Ministers insisted Ms Fitzgerald, then minister for justice, and her department did not know about and had “no hand, act or part” in the Garda strategy.

However, the Charleton tribunal heard on Monday that when the Garda’s aggressive approach to Sgt McCabe was questioned at the O’Higgins commission, which was investigating his allegations of Garda malpractice, the then Garda commissioner Nóirín O’Sullivan sought advice from the Department of Justice.

The tribunal, which is examining allegations of a Garda smear campaign against Sgt McCabe, heard that on May 15th, 2015, Ms O’Sullivan’s legal team contacted her seeking confirmation that it should question his motivation.

In a note taken on the day, Chief Supt Fergus Healy recorded that several telephone conversations had taken place between him and Ms O’Sullivan.

The issue was “the requirement to question the motive of Sgt McCabe”, he wrote.

“Commissioner sought time to speak to DoJ,” the note recorded. “Then returned with instructions” that if counsel was so advising, then “we explore the issue of motive”. This advice was then given orally to the legal team.

The former assistant secretary at the Department of Justice, Ken O’Leary, was contacted twice by Ms O’Sullivan on May 15th, 2015, to discuss the issue of the legal approach being taken by her counsel.

In a statement, Mr O’Leary told the tribunal he was “acutely conscious” of the position of the department in relation to the commission and it was entirely a matter for the Garda commissioner, taking into account the legal advice given to her, what position she adopted.

He said Ms O’Sullivan had asked him whether, based on his experience, anything occurred to him of which she should be mindful. He suggested she should be guided by her legal advisers but also mentioned the “need for sensitivity in relation to protecting the position of Sgt McCabe [and] the position of other people at the commission against whom serious allegations had been made”.

Later that day an email was sent to Ms Fitzgerald’s office briefing her on the exchange. She has said she does not remember reading the email.

Asked if the Taoiseach still held the position that the department did not know about the details of the Garda approach to Sgt McCabe, a spokesman for Leo Varadkar said: “As the tribunal’s work is ongoing and hearings are continuing, it would not be appropriate for the Taoiseach to comment on the evidence of an individual witness.”

Political sources also expressed alarm at the news of the volume of new evidence provided to the tribunal recently. Dozens of boxes of evidence had been made available in recent weeks by the Garda and the Department of Justice, including five last Friday alone. Both bodies were legally obliged to provide all relevant documentation to the tribunal several months ago.