Family of Japanese stab victim recall his ‘love of Dundalk’

About 1,500 people attend vigil for Yosuke Sasaki (24) who was killed last Wednesday

Around 1,500 people have gathered in Dundalk to remember Yosuke Sasaki, a 24-year-old Japanese man who was stabbed to death in the town. Video: Conor Gallagher 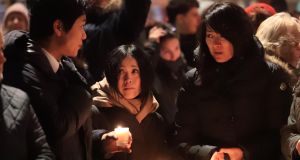 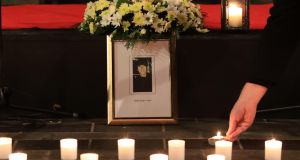 It’s probably true that Irish people care too much about what the rest of the world thinks of them. But it was tough to find fault with that preoccupation on Monday night when hundreds of people gathered on a cold evening in Dundalk to send a message to one family in Japan: We grieve with you.

About 1,500 people crowded into the town centre, many cupping candles in their hands as they tried to protect the flames from being extinguished by the wind.

They were there for Yosuke Sasaki, the 24-year-old Japanese man who was stabbed to death in the town last Wednesday.

Representatives of the Catholic Church, the Church of Ireland and Dundalk’s Muslim community joined Ambassador Mari Myoshi of the Japanese embassy and colleagues of Mr Sasaki in the square outside the courthouse where, on Friday, an 18-year-old was charged with his murder.

The vigil was also attended by the two other victims of Wednesday’s attacks - Dylan Grehan and Cian Murphy - both of whom are recovering well from their injuries.

There was a universal sentiment amongst the mourners that Mr Sasaki would be remembered as one of their own, as a young man who liked Dundalk so much he decided to stay and work there, having initially come just to learn English. They also wished to tell Mr Sasaki’s family, who are currently making arrangements to bring his body back to the city of Ebina-Shi, that their son was welcomed here. A fundraising drive in Ireland has already raised nearly €18,000 to cover the costs of his repatriation.

“It is so important to come together, to grieve together in the same way a community is grieving in Japan. This is to show our strength and unity with Yosuke’s family,” said one of the organisers of the event, councillor John McGahon.

In turn, the Sasaki’s family sent a message to the town: “When he was alive, our son spoke about the warmth of the people of this town and his love of Dundalk.

“He came to Ireland initially as a language student and only intended a short stay. However, he was touched by the kindness of the Irish people and he decided to work here.

“As a family, we are truly saddened by what has happened, but we hope that this incident will not give Japanese people a bad impression of Ireland.”

The Japanese embassy also expressed gratitude for the messages of support it has received from Irish people in recent days.

Near the end of vigil, Fabio Teretino, a colleague of Mr Sasaki’s in the National Pen facility, which employs a large number of international employees, read out a poem before local musicians played “Imagine” by John Lennon.

In a closing remark, Mr McGahon told the crowd: “When you do go home tonight think of Yosuke, think of what his family are going through and then hold your loved ones a little bit tighter. Tell them you love them.”