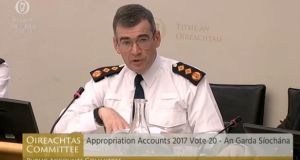 Drew Harris speaking at the Public Accounts Committe on Thursday.

An allowance awarded to gardaí to avoid industrial action 2½ years ago is now using up €22 million of the force’s annual overtime budget and is “not sustainable” and was being reviewed, Garda Commissioner Drew Harris has said.

Furthermore, he revealed that budgetary constraints were a factor in his decision to recruit fewer new Garda members this year; 600 rather than the 800 initially planned.

The “parading allowance”, in place since 2016, is using up one quarter of the Garda’s overtime budget, according to Commissioner Harris who appeared at the Public Accounts Committee on Thursday.

The committee also heard that one Garda member earned €76,000 in overtime last year.

The total overtime budget in the Garda was now much lower than two years ago. For example, while €132 million was spent on overtime in 2017, overtime has been cut this year to €95 million.

And when the allowance agreed under the 2016 pay deal is factored in, the real overtime budget for the current year as the Garda faces very violent gangland feuding in Dublin and Louth, is “only €73 million”, Commissioner Harris told the committee.

The parading allowance was among a package of measures agreed in the autumn of 2016 when members who are of garda, sergeant and inspector rank planned to withdraw their service – a strike in all but name – on four consecutive Fridays in a row over pay.

Just before the first 24-hour strike was due to go ahead, a deal was reached and one component of that was an extra payment to Garda members for the 15-minute parading period at their start of their shifts.

During that parading period gardaí all over the country starting a new shift meet up in their stations and are briefed about their shifts.

That time had previously been unpaid but a fee for it was agreed under the 2016 deal. However, that fee is paid in overtime and is now coming out of the force’s total overtime budget.

Commissioner Harris told the Public Accounts Committee the cost of that measure was currently €22 million annually. He said this must be paid out of the Garda’s total overtime budget and it was something he had no control over.

“As the number of members we have grows, that cost will continue to grown,” Mr Harris said, adding a rent allowance had also been built into salary and had become pensionable.

“A lot of the overtime budget gets caught up in practices we have no discretion over. The quarter of an hour parading time drains money out of the budget,” he said.

“So, for example, in 2019 €22 million out of a total overtime budget of €95 million will be spent on the 15-minute parading time. This effectively means that our real operational overtime budget is only €73 million.”

Mr Harris said the payment of the overtime fee was “not sustainable”. He was examining the matter and believed shift patterns meant there was no need for parading time. The review of the parading allowance will be watched closely by the Garda staff associations. Any effort to unwind the payment agreed under the 2016 pay deal would likely be resisted by the Garda Representative Association, which represents rank and file gardaí, and the Association of Garda Sergeants and Inspectors.

Mr Harris added the Garda was still providing some services, much of it on overtime, that other international police forces no longer supplied. For example, escorting prisoners to and from court had been “largely eradicated in other jurisdictions”, he said.

The budget increased significantly because the new parading allowance began to be paid, and was paid from the overtime budget, and the Kinahan-Hutch feud also necessitated a very significant policing response.

“There was the vicious drugs feud and that requires an extraordinary response from the organisation,” Commissioner Harris said.

Deputy Commissioner John Twomey added when the Kinahan-Hutch feud first broke out – with a shooting in the Regency Hotel, Dublin, in February, 2016 – members of Armed Support Units in the regions were drafted into Dublin, which had no ASU of its own at the time.

This had proven expensive at the time, which was reflected in the 2017 overtime bill. However, ASU members have since been recruited in Dublin.

David Cullinane TD (SF) asked the Commissioner why a decision had been taken to decrease the number of Garda members recruited this year to 600, down some 200 on the level that had been envisaged.

Mr Cullinane said there was clearly a demand all through the country for more gardaí.

Commissioner Harris said he had decided this year to focus on modernising the Garda’s workforce by hiring 500 civilian staff.

This would free-up that number of Garda members from office jobs for a return to frontline policing duties.

“It was also in respect of affordability issues as well,” Commissioner Harris said. “We have to live within our budget of €1.76 (billion).

Pressed on whether he would have preferred to recruit 800 new gardai but could not do so because he didn’t have the money, Commissioner Harris replied: