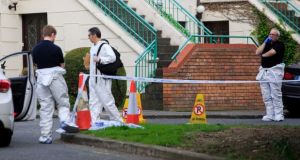 Members of the gardaí at the scene where partial skeletal remains were found at Lower Rathmines Road, Dublin on April 9th. Photograph: Gareth Chaney/Collins.

A postmortem was completed on the remains last Tuesday by the Office of the State Pathologist and it is understood that this did not point towards it being a homicide.

However, as only parts of the skeleton have been located, it has not been possible to establish a definitive cause of death.

“A full investigation will now be conducted by gardaí based in Rathmines with a view to identifying the deceased,” a Garda spokeswoman said.

DNA tests have been conducted on the remains and cross-referenced with missing persons’ profiles but this process is yet to turn up a match.

Sources warned that due to the scant information available, it is possible the remains might never be identified.

The partial human remains were found on a common area off the Lower Rathmines Road on April 9th whie work was being carried out on the site. No clothing remained on the skeletal remains and there had been no apparent effort to bury them.

A forensic anthropologist visited the site to carry out inquiries, as did members of the Garda Technical Bureau. The remains were brought to Dublin City mortuary where they will remain until identified.