Cocaine seized in Dublin worth €2.5m imported by Kinahan cartel

Three men were arrested during a suspected handover of the drugs 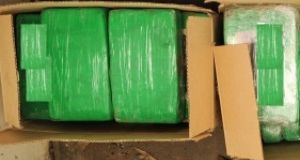 Gardai have seized cocaine worth an estimated €2.5 million

Gardaí investigating the discovery of cocaine valued at €2.5 million believe it had been imported by the Kinahan cartel and was destined for sale in Ireland on both sides of the Border.

Three men were arrested during a suspected handover of the drugs which gardaí believe were destined for a criminal gang just south of the Border.

However, Garda sources believe a consignment of €2.5 million was too big to service even the larger towns around the Border and they suspect it was set to be sold to users in the Republic and the North.

The seizure of the drugs, the largest haul found so far this year, resulted from an intelligence-led Garda operation that had been underway for some time by the Garda National Drugs and Organised Crime Bureau under Det Chief Supt Angela Willis.

As part of the investigation a number of suspects were under surveillance and gardaí moved in and seized the drugs at a service station off the M1 in north Co Dublin on Saturday afternoon.

Investigating gardaí believe the drugs had come into the country in container freight and that they were being delivered to an Irishman collecting the consignment on behalf of a gang based close to the Border.

The men arrested were being detained at two Garda stations in Dublin under Section 2 of the Criminal Justice (Drug Trafficking) Act. They are aged 44, 48 and 59 years. Two of the men are from Eastern Europe while the other is Irish.

The drugs were packaged into parcels wrapped in plastic and gardaí suspect the consignment had arrived at the scene of the arrests in two vehicles and was about to be swapped into a third.

Garda sources said the seizure of the drugs demonstrated that gangs were attempting to continue their illegal trade despite the Covid-19 restrictions. However, they said the restrictions had resulted in much lighter traffic on the roads meaning efforts to move drugs around by car or truck were higher risk at the present time.

Gardaí have seized firearms and drugs during the duration of the lockdown period as investigations into organised crime continue despite the significant policing operation underway to enforce Covid-19 restrictions across the country.

“The Garda Síochána is committed to disrupting the activities of organised criminals supplying drugs to our communities,” Det Chief Supt Willis said in a statement issued by Garda Headquarters, Phoenix Park, Dublin.

“This seizure of a substantial quantity of cocaine is significant in disrupting this supply and enabling us to keep people safe.”

Assistant Commissioner John O’Driscoll, who leads Special Crime Operations in the Garda, said there would be no interruption to investigations into serious crime.

“This seizure of what is believed to be cocaine and the subsequent arrest of three suspects will assist in achieving that objective.”