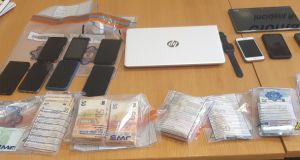 The cash is believed to be the proceeds of crime including internet scams, organised prostitution, thefts and fraud. Photograph: Garda Press

Gardaí believe an international crime gang based in Dublin has run at least €1.5 million from the proceeds of crime through a series of so-called mule bank accounts and company accounts in the Republic.

The cash is believed to be the proceeds of crime including internet scams, organised prostitution, thefts and fraud. On Wednesday gardaí arrested five men who are Romanian nationals living in Dublin. Gardai are also investigating members of the group for claiming fraudulent Covid-19 benefits of €350 per week.

As much as €50,000 may have been claimed in bogus Covid-19 payments by 15 people linked to the group under investigation. Some €40,000 on deposit has been frozen as part of the Garda inquiry and €30,000 in cash was seized during the searches.

Luxury goods have also been seized by gardaí, including a sizeable quantity of expensive whiskey and champagne.

Gardai are investigating money moving through about 70 bank accounts and eight companies, including those linked to the car trade. The investigation to date has discovered 18 bank accounts in the name of one person.

A series of searches was carried out on Wednesday morning in north and west Dublin by members of the Garda National Economic Crime Bureau assisted by Romanian-speaking gardaí and Garda members seconded to the Department of Employment Affairs and Social Protection.

“Gardaí identified a number of bogus companies established by a criminal organisation and a large number of bank accounts set up in both false names and money mules,” a Garda statement said. “Gardaí have established that about €1.5 million was laundered through these accounts.”

Mule accounts are those held by people but which are used by crime gangs to receive and move money after the account holder has been coerced or agrees to allow access to their accounts for a fee.

Some of the money under investigation by the Garda represents the proceeds of cyber-crimes based on scams that seek to extract money from victims’ payment cards by sending bogus text messages or making deception-based phone calls to people.

At the eight properties searched on Wednesday gardaí seized documentation related to companies and bank accounts linked to them along with various forms of identification, 10 mobile phones, smart watches, a laptop and tablet and cash. The phones and other devices were confiscated for examination to determine if they contained any information of evidential value.

Five men were arrested on suspicion of a variety of offences include money laundering and obstruction. All five are in their 20s or 30s and from Romania, with two of the men detained under Section 50 of the Criminal Justice Act, allowing gardaí to detain them for questioning for up to seven days without charge.

One of the men is being detained on suspicion of obstructing gardaí while the fourth and fifth suspects were being held under Section 4 of the Criminal Justice Act.

The arrested men were taken for questioning to Clontarf, Ballymun, Swords, Raheny and Store St stations in Dublin.