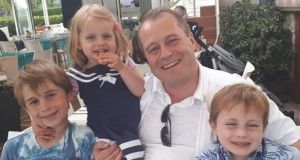 Conor (9), Carla (3) and Darragh McGinley (7) with their father Andrew McGinley. The children were found dead in a house in Co Dublin on Friday night. Handout photograph: Andrew McGinley/An Garda Síochána.

It may be several days before gardaí can interview the mother of the three McGinley children who were found dead in their home in Newcastle, Co Dublin late last week.

The bodies of Conor (9), Darragh (7) and Carla (3) were discovered in their home in the south Dublin village just before 8pm on Friday.

The children’s mother, Deirdre Morley, remains in an unconscious state in Tallaght Hospital. The nurse was found by a taxi-driver in a disorientated condition near her house on Friday evening.

Doctors have warned investigators they will not be able to interview Ms Morley until her condition improves significantly. It is understood that, although the woman remains seriously ill, she is expected to survive.

A Garda source said the investigation is a murder inquiry “in all but name” but that it is unlikely to be officially designated as such until gardaí speak to Ms Morley.

Gardaí believe the children were drugged, possibly with a sedative, before being suffocated. Investigations will centre on what medication was in the house at the time.

Ms Morley worked at Our Lady’s Children’s Hospital in Crumlin before going on stress related leave several months ago.

The children’s bodies were discovered by emergency workers along with a note stating “don’t go upstairs” and “call 999”. It is understood that another note was later found expressing concern about the children’s futures.

Andrew McGinley, the children’s father, returned to the house on Parsons Court on Monday in the company of family members following the completion of examinations by forensic experts and scenes of crime examiners.

Throughout the evening neighbours continued to add to the hill of flowers and teddy bears which has appeared outside the house over the weekend.

Postmortems on the children have been completed but gardaí have declined to release the results, citing operations reasons. Further toxicology reports are still awaited and will help guide inquiries, gardaí said.

Mr McGinley, a manager at a catering and facilities management company in south Dublin, has already spoken with gardaí on several occasions.

On Monday the school attended by Conor and Darragh McGinley described them as “wonderful boys”.

Scoil Chrónáin, a gaelscoil in Rathcoole, said it was “deeply saddened” by the sudden deaths of Conchúr and Darragh Mac Fhionnghaile and their sister Carla.

Conor was in third class and Darragh was in first class at the school. Carla (3) attended a local pre-school.

“It is a tragedy for our community. Our sympathy, thoughts and prayers are with the McGinley and Morley families and all their friends,” the school said in a statement.

“Conchúr was a pupil in ‘Rang a Trí’ and Darragh was in ‘Rang a hAon’. They were both wonderful boys and it was a pleasure to have them in our school. They will be greatly missed by all who knew them.

“Offers of support have been pouring in and are really appreciated.”

The school has implemented a critical incident management plan in response to the deaths of the three children, who were found at their home on the Parson’s Court estate in Newcastle.

Psychologists from the National Educational Psychological Services (NEPS) attended with the school over the weekend and will continue to provide support and advice in the coming days.

NEPS staff will provide support to parents and teachers as well as advice on how to talk to children about the tragedy.

Support is also being provided by the South Dublin Children and Young People’s Service Committee (CYPSC) and Tusla.

The school said that it would remain open and asked that the media respected the privacy of the school as well as the McGinley and Morley families’ need for privacy at this time.

Independent inquiry to examine mother and baby homes in North 16:56
Pat Kenny ‘taken aback’ by scale of nursing home planned for site next to his home 16:54
Coronavirus: Northern Ireland reports 16 further deaths 16:46
Target to have all adults vaccinated by September ‘contingent on deliveries’ 16:38
Remote hearings of High Court personal injuries cases to resume 16:13