Masks will be mandatory, in most cases, on public transport from midnight on Sunday 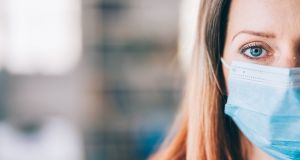 Failure to comply with the new face mask regulations could bring a penalty of up to six months in prison and a fine of up to €2,500.

Gardaí only received guidance on the enforcement of the new face mask regulations on public transport some five hours before they became law.

At midnight it became compulsory to wear a mask on public transport except in specific circumstances. Gardaí only received guidance on the enforcement of the regulations at 7.30pm on Sunday night.

Until then gardaí said they had been relying on media reports for information on the legislation which was signed by Minister for Health Stephen Donnelly on Friday.

Those not wearing masks and who fail to comply with a direction to put one on or to exit the public transport vehicle face arrest and prosecution. Failure to comply attracts a penalty of up to six months in prison and a maximum €2,500 fine.

The penalties outlined in the new legislation are the same as those laid down for breaching the now defunct movement restrictions.

Earlier yesterday Garda representation organisations expressed concern that, hours before the new law was due to come into effect, no official instructions had been issued to members.

“Our members have been given no instructions on policing new public transport regulations. Normally, a circular is issued on the Garda Portal for all gardaí to see but there is nothing there,” said Dermot O’Brien, interim Assistant General Secretary of the Garda Representative Association (GRA) on Sunday afternoon.

The GRA urged garda management to “bring full clarity to how this should be policed.”

Mr O’Brien said “as it stands, gardaí are relying on media reports. All our members know is that a passenger refusing to wear a facemask without good reason faces arrest and prosecution.”

“To date the operational members have received no guidance on the enforcement of these regulations or indeed on who is responsible for this enforcement.”

The Garda said in a statement last night: “In circumstances where a non-compliant passenger, without reasonable excuse, fails to accept the refusal or comply with a ‘relevant person’s’ request, members of An Garda Síochána may be called to assist.”

“An Garda Síochána will continue its graduated policing response based on its tradition of policing by consent. This has seen gardaí engage, educate, encourage and, as a last resort, enforce. That approach will continue in assisting the enforcement of these regulations.

“Where potential breaches of regulations are identified, a file will be submitted to the Director of Public Prosecutions.”

The National Bus and Rail Union has welcomed the move towards mandatory mask wearing, which it said it had been seeking for some time.

However, the union’s general secretary, Dermot O’Leary, said his members would not be policing the mandatory wearing of face coverings.

He said if a dispute arose over the non-wearing of masks, transport staff would contact the control centre to call gardaí to the scene.

Minister for Health Stephen Donnelly on Friday signed the regulations, which are set out as the Health Act 1947 (Section 31A – Temporary Restrictions) (Covid-19) (Face Coverings on Public Transport) Regulations 2020.

Taoiseach Micheál Martin has said he believes people will comply with the new rules without the need for gardaí to enforce their power.

“If you look back on our entire experience throughout Covid-19 it has been really developing compliance, engagement and people have come with us on that journey and come with the authorities,” he said.

Masks are mandatory on public transport except when someone has a “reasonable excuse”.

The regulations do not apply to children under the age of 13.