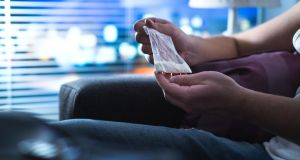 Cocaine has become increasingly popular among men with higher disposable incomes as the economy recovered in recent years. Photograph: iStock

For the first time in the State more people have been presenting for treatment for cocaine use than for cannabis, while the number of children entering drug treatment has also significantly increased.

New data for drug trends in Ireland from the Health Research Board (HRB) reveals that although heroin remains a very significant problem, it is being displaced by cannabis and particularly cocaine.

Men about 30 years of age have been using cocaine, while drinking alcohol, in such large numbers they are driving changes for the treatment of all drug types, the HRB has found.

Its findings correspond with concerns among senior Garda officers who told The Irish Times that cocaine had become increasingly popular among men with higher disposable incomes as the economy had recovered in recent years.

Interim chief executive at the HRB, Dr Mairead O’Driscoll, said the new figures “illustrate the level of cocaine use in Irish society”.

“The consistent rise in demand for cocaine treatment, coupled with an increase in cases in paid employment and a decrease in proportion of cases mixing drugs, reflects clear changes in patterns of drug use,” she said.

The new 2019 drug treatment data, set for release on Thursday by the HRB, reveals numbers now seeking treatment for cocaine as their main problem drug having trebled since 2013. Some 14 per cent of cocaine users in treatment last year also said they had used crack cocaine, up from 11 per cent in 2018.