Gardaí arrest 300 for intoxicated driving since end of November 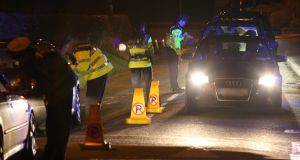 The arrest rate so far this year stands at just one third of 2018 when 938 drivers were caught on suspicion of intoxication. File photograph: Colin Keegan/Collins Dublin.

Over 300 people have been arrested for intoxicated driving since gardai began their Christmas Road Safety Campaign at the end of November.

“To all persons driving throughout the Christmas period, please be responsible and safe. Do not put yourselves or other road users at risk,” gardai said in a statement.

“Operate within the applicable speed limits and never drive under the influence of alcohol or drugs.”

The latest numbers are expected to rise over the Christmas period. The arrest rate so far this year stands at just one third of 2018 when 938 drivers were caught on suspicion of intoxication.

One-in-10 of those arrested were found to be over the limit after having consumed alcohol the night before, a focal point of the 2019 publicity campaign.

Gardaí arrested 11 people for drink driving last Christmas Day. A number of them refused to provide a breath sample, therefore incurring a four-year driving ban on conviction in court.