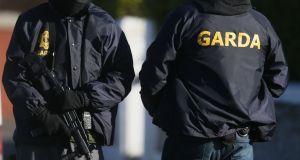 Armed gardaí on patrol in Dublin in a bid to curb gangland violence. Photograph: PA

The “family-on-family” nature of the Kinahan-Hutch feud makes it a complex dispute to police, gardaí have said a year after the Regency Hotel shootings in Dublin sparked internecine conflict and led to the murder of 11 people.

Gardaí believe they have made significant inroads into organised crime in the last year following an injection of funding, streamlining of intelligence, systemic reorganisation and a focus on “following the money” of known criminals.

Asked whether the feud was likely to drag on at a briefing on Wednesday, Garda Commissioner Nóirín O’Sullivan said: “In terms of retribution, the fact and the unfortunate reality is that individuals who are determined on retribution will continue that determination.

“We have to be very, very mindful of the threat that that poses to individual members of the community, to the broader community and...to our own members.”

There are now eight people before the courts in relation to the ongoing violence, charged with various offences.

“The Regency [incident] was labelled as spectacular and it was a spectacular; it was I suppose an elaborate murder but that is what it is, it’s a murder,” the commissioner said when asked to reflect on last year’s audacious killing during a boxing weigh-in.

Ms O’Sullivan said gardaí responded as always by investigating and focusing on catching those responsible. “Many of these individuals are lifelong friends so the feud had become very personalised and it has split down along two families,” he said.

“It makes that feud all the more difficult to tackle when you are actually family-on-family. Communities have been torn apart.

“Historically feuds have been northside/southside or east or west. The problem is that people in these communities have supported people on the opposite side of the fence so it does make it significantly more difficult. But we have made huge inroads.”

Gardaí have responded visibly and covertly with an emphasis on both armed checkpoints and hidden policing, the extent of which is never clear publicly. Numerous lives have been saved as a result, they say.

“We are working in the shadows. Any intelligence we have we act on it,” said Det Supt Howard.

Fighting organised crime across the State in the last year led to the seizure of 456 firearms, €2.2 million in cash, 93 high value vehicles and €64 million worth of drugs.

Ms O’Sullivan said working with the Criminal Assets Bureau (Cab) was “very significant, making sure that we follow the money and that we degrade and dismantle these groups”.

“The reality is that the world has become a much smaller place,” she said. “Transnational crime knows no boundaries and in recognition of that we are reviewing our liaison officer network; we will be strengthening that not just in Europe but further afield.”

Refusing to speculate on the number of organised gangs operating in Ireland – the situation was described as being too “fluid” – Deputy Commissioner John Twomey said the saturation checkpoints were designed to enable gardaí “take the ground”.

It was, he said, about “not allowing the people who want to [to] wreak havoc in our communities, not giving them a free rein to move around.”

Assistant Commissioner John O’Driscoll said investing in the Cab had brought dividends, allowing the seizure of proceeds of crime which in the last two days had even included livestock.

“Whatever way people wish to invest their money,” he said, “whether it’s a Rolex watch, whether it is a herd of cattle or whether it is expensive cars – all of this needs to be targeted and the enhanced capacity that we have in our restructured specialised units is giving us the opportunity”.