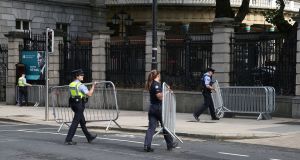 The scene earlier this week ahead of a planned protest. A detective sergeant has been appointed to investigate the assault on a veteran LGBT+ campaigner, who was attacked during an anti-mask protest outside the Dáil last Saturday. Photograph: Nick Bradshaw

Gardaí are increasingly concerned by the presence of far-right extremists at anti-mask rallies in Dublin and the possibility of serious violence breaking out at future events.

Violence has occurred at two anti-mask rallies in recent weeks, including an incident last Saturday which left a counterprotester requiring hospital treatment. On August 22nd, a small number of far-right agitators attended a large anti-mask protest outside the Custom House armed with a variety of weapons including iron bars and extendable batons.

Despite a large Garda presence, these men, who wore masks and surgical gloves, clashed with counterdemonstrators, leaving one requiring medical treatment.

Gardaí believe some of the men involved in the violence were members of the Irish branch of Generation Identity, a now seemingly defunct white nationalist organisation which focused on street activism.

Generation Identity has a history of sending recruits to military-style training camps in Europe for fitness training and lessons in hand to hand combat.

Gardaí are aware of some Irish far right activists boasting online about attending training camps but it is not clear if these are the same camps organised by Generation Identity or if the activists attended them at all.

Irish Generation Identity members are still involved in the Irish far-right movement and a handful were present at the two recent anti-mask protests where violence occurred.

“It is a small but growing concern. There is a feeling this could get out of control and we could soon be looking at very serious injuries among protesters or counterprotesters,” a security source said.

Further anti-mask protests by various groups are planned over the next three weekends. The Garda Public Order unit is to be put on standby for the events.

In February, an anonymously authored planning document was circulated widely in Irish far-right circles following the movement’s failure to return any candidates in the recent general election.

It called on far-right activists to form “martial arts groups for mutual protection”, to “act as an army” and to engage in the “strategic use of gardaí for security matters”.

The protest in August was run by Health Freedom Ireland, which has been campaigning against the Government’s Covid-19 measures. It said it has no connection to far-right groups and that it cannot control who shows up at its events.

“We are protesting for a very specific reason and we don’t expect every participant to agree with us on everything else also,” its founder Maeve Murran said.

Meanwhile, a detective sergeant has been appointed to investigate the assault on Izzy Kamikaze, the veteran LGBT+ campaigner, who was attacked during an anti-mask protest outside the Dáil last Saturday.

Ms Kamikaze said she was struck with a pole wrapped in a Tricolour, leaving her with a gash to her head. Some of the participants at the event wore badges reading “Antifa Hunting Permit. Open season all 58 genders”, a reference to the decentralised left-wing protest which has come to prominence in the US in recent months.

Last year Garda Commissioner Drew Harris said he was “concerned about right-wing extremism. We can see evidence of it on our shores as we have seen it spread across Europe.”

In June, Europol said in a report that “known criminal elements have been identified as affiliated with right-wing protests” in Ireland.