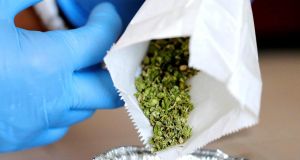 It is the first time in the history of the State that an illicit drugs offence can been dealt with outside the conventional criminal justice system, using a prosecution-based process. Photograph: Alessandro Bianchi/Reuters

People caught with cannabis for personal use can now be dealt with under the adult caution system, meaning they would not be prosecuted and would not have a criminal record.

However, those caught with larger consignments of cannabis can still be prosecuted, as can people caught repeatedly with cannabis for personal use.

Possession of cannabis for personal use is one of four new offences added to the adult caution scheme, which aims to deal with offenders more informally and so free up Garda and court time.

It is the first time in the history of the State that an illicit drugs offence can been dealt with outside the conventional criminal justice system, using a prosecution-based process.

The adult caution scheme is intended to remove the threat of a criminal record for those people who commit relatively minor offences, especially first-time offenders.

Garda Headquarters, Phoenix Park, Dublin, said on Wednesday that possession for cannabis for personal use had been added to the adult caution scheme two days ago.

The other offences added to the list, following agreement with the Director of Public Prosecutions, include breaching the “control of access to certain events” provisions in the Criminal Justice (Public Order) Act.

This arises when gardaí erect crowd control barriers to create a cordon around major public events – including sports events and music concerts and festivals. Breaching that cordon without being admitted by gardaí is a public order offence but can now be dealt with using an adult caution rather than a prosecution.

Casual trading without a licence or contrary to the terms of the licence and trespassing in a manner likely to cause fear have also been added to the adult caution scheme, which was first established in 2006.

When announcing plans in August, 2019, to add possession of cannabis resin or herbal cannabis to the adult caution scheme, the then minister for health Simon Harris said it would affect about 12,000 people a year who come to the attention of gardaí for drug possession for personal use.

About 10 per cent of these, he added, were expected to be referred for further treatment and therapy under the new system rather than being processed by the criminal justice system as at present.

An Garda Síochána, in an observation in the drugs policy report launched at the time, argued against multiple adult cautions. It warned that illicit drug users may exploit that they are permitted to carry and possess drugs for personal use.

“Drug dealers and their couriers may adapt their behaviour to carry small quantities of drugs in the knowledge that they are permitted to possess a quantity of drugs for personal use,” the Garda observation said.