‘Don’t assume the supplier has your best interest at heart’

It really is buyers beware, because Irish people know a lot less about their rights than they think, say the authors of a new book 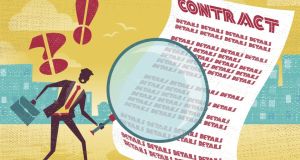 Read the small print to empower yourself

She and her colleague Fidelma White, also a senior lecturer of law, have recently published Consumer Law: Rights and Regulation.

While they wrote the book to better inform legal advisers, they also have some advice for the average consumer purchasing products or services.

They preface the advice with a warning: Irish consumers know less about their rights than they might realise.

This assertion is based on a 2010 Eurobarometer study on consumer empowerment across the European Union. Ireland had among the highest proportion of consumers who felt confident and knowledgeable about consumer issues.

When tested on actual knowledge, however, the findings, while broadly in line with the EU average, suggested knowledge deficiencies.

“There is a huge need for education” for Irish consumers, who are “in general less knowledgeable and overconfident,” says White.

She says many people do not know how to protect themselves when buying goods and obtaining financial services. “A real issue in the financial services area is that the terms are quite complex and not particularly accessible to consumers,” says Donnelly.

By financial services, she means things such as insurance policies and credit card accounts.

The first thing consumers can do to become empowered is read the fine print, which may contain hidden details. If the terms and conditions are inscrutable, ask questions of the seller.

“When we’re buying a financial product, we are very often told to sign here and sign there,” says Donnelly. “We do that, and we don’t even recognise that we’re buying something that is actually potentially quite dangerous, which may get us into all sorts of messy situations. So the first thing would be to read carefully.

“The second thing we would say is to seek legal advice. And that doesn’t have to be formal legal advice; go to citizens [information].”

A useful body for bringing consumer complaints is the Financial Services Ombudsman, which she says offers an “excellent complaint resolution service”.

The advice to read the fine print extends to gift vouchers, an issue in consumer law that is particularly topical after Christmas.

Consumers should be conscious that some gift vouchers have expiry dates or reduce in value over time.

“Education of consumers is very important, and that’s where the new Competition and Consumer Protection Commission [CCPC] could play a significant role, or indeed the secondary school curriculum could play a larger role,” says White.

“If consumers are more educated and more assertive, you reduce the number of problems and level of detriment that might arise.

“Typically in Ireland,” she adds, “we would have had a weak consumer voice. OECD reports reflect that. A lot needs to be done to fill that gap. We wouldn’t have as strong a record as other EU countries. We have quite a bit of catch-up to do.”

“There was very little consumer law before 1980 in an Irish context,” she said. And Irish consumer law has been “almost dominated by the EU. They set the agenda, and they implemented European directives.”

According to White, the one-size- fits-all approach does not work: “We would be strongly of the view that there has to be a strong Irish voice in this agenda looking particularly at the needs of Irish consumers.”

The new CCPC, which was established last year, combined the former Competition Authority and the National Consumer Agency. It was created to enforce both competition and consumer protection law. Late last year, the CCPC published the results of a consumer detriment study carried out on its behalf by market research group Ipsos MRBI.

Forty-four per cent of respondents reported experiencing a problem after buying a product or service in the previous 12 months. The study showed that the overall financial detriment experienced by consumers during that period amounted to almost €500 million.

White and Donnelly hope the CCPC will reform Irish law in relation to the sale of goods and services and unfair terms in consumer contracts. However, adequate resourcing is essential.

“It’s very difficult for a consumer to enforce their own rights,” Donnelly said. “They do need some kind of strong body to assist in a situation. Adequate resourcing is absolutely key to consumer protection.”

“If a directive is adopted at European Union level, it could be three years before it’s transposed into Irish law,” said White. It is also a challenge for law or regulation to keep pace with new products and marketing techniques.

According to White, the EU is also looking at methods of collective redress, or class action lawsuits, where a group of consumers who suffered a similar detriment can “gang together” and take on a supplier in a unified way.

“In this country, broadly speaking, if as a consumer you have a problem, you kind of have to go it on your own.” Top tips for consumers: Inform yourself Mary Donnelly and Fidelma White offered the following tips for consumers. TERMS & CONDITIONS Read the terms and conditions, and do not sign anything without reading and understanding it first. COMPLAIN TO SELLER If something goes wrong, complain to the seller. They often respond favourably. OTHER REMEDIES Learn about what other remedies are available when something goes wrong. FREE ADVICE Seek advice, much of which is free, from places such as the Money and Advice Budgeting Service (mabs.ie) for financial services, and the Competition and Consumer Protection Commission (ccpc.ie) and Citizens Information (citizensinformation.ie) for consumer goods. ALTERNATIVE AVENUES Know where to bring complaints outside of a legalistic arena such as the small claims court. There are avenues to resolving disputes that consumers may not know about. CONSUMER AGENCIES If complaining directly to a business does not work, complaints can be brought to the Competition and Consumer Protection Commission, which has a helpline: 1890-432432; consumerhelp.ie. SWITCH SUPPLIER Use your power as a consumer by switching suppliers, products or services if you are unhappy with them. Vote with your feet.