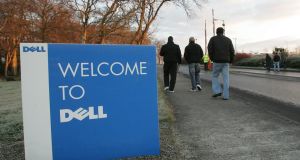 Dell workers at the Rhaeen industrial estate on the way into an information meeting where they learned of the redundancies in 2009. Photograph: Alan Betson

A group of workers made redundant from the Limerick plant of US computer multinational Dell have lost a High Court action alleging they were entitled to some prior notice and consultations about the redundancies.

Brian Tangney and 27 other workers had challenged a decision of the Employment Appeals Tribunal dismissing their complaint that Dell Prodcuts, Limerick, breached the Protection of Employment Act in how it dealt with them.

The complaint arose after employees were each given a letter from the company on January 8th 2009 outlining its intentions to cease manfacturing in Ireland, which meant the loss of 1,900 jobs. On the same day, they were briefed by senior management at staff meetings.

The 28 workers alleged what happened on January 8th amounted to a notice of dismissal and any discussion that took place after that were too late to be effective.

After the announcement, Dell’s Site Communication Team held discussions with the Dell Employees Representaive Committee which, lawyers for the company claimed, led to it modifying a planned redundancy package at an additional cost to it of €9m.

The core issue in the case was whether a notice of dismissal took place on January 8th 2009 and, therefore, whatever consultations happened afterwards came too late.

The company insisted what occurred that day was sufficient for it to comply with its statutory obligations.

The workers argued Dell had decided to terminate their employment before January 8th 2009 and had, on that date, merely communicated a decision already taken without any consultation with them.

A Rights Commissioner had ruled in November 2009 that Dell breached Section 9 of the Protection of Employment Act but that decisiom was overturned on appeal by the Employment Appeals Tribunal. The workers then appealed to the High Court.

Today, Mr Justice George Birmingham found there was evidence the letters to the employees of January 8th 2009 were “not simply the communication of a fait accompli”. He also said many matters of substance in those letters had changed between that date and March 27th 2009, when consultation with the workers ended.

These matters included that some employees were redeployed. The leaving dates for sevral production lines was also different from what was sugegsted in the letters and there was a “significant improvement” in the severance package for employees, he said.

The judge said he acknowledged the January 8th letter did not suggest the employer had an “open mind” or the employees were being provided with “a blank sheet”. A communication “couched in generalities” would be of little assistance to employees and the letter did specifically state it was “for informaiton purposes” only and did not constitute contractual terms of conditions, he said.

In such circumstances, he found a point of law had not been identified to provide a basis for overturning the decision of the Employment Appeals Tribunal. The Tribunal’s decision was essentially one of fact and he was dismissing the appeal, he said.