Daughter blames members of the UVF for Ian Ogle’s murder 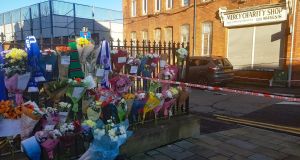 The daughter of Ian Ogle who was stabbed to death in east Belfast in what police described as a “barbaric” attack has blamed members of the Ulster Volunteer Force for the murder.

Toni Johnston said her father and her brother previously were ordered by UVF members in east Belfast to report “by appointment” for a so-called punishment attack but that they refused.

She said the family were living in fear from members of the east Belfast UVF notwithstanding that the organisation “wholeheartedly condemned” the murder.

“What I have to say to the UVF, what I have to ask from the UVF, is why these thugs were able to terrorise this community for so long. I am not blaming the organisation as a whole, but they were using the name of the UVF. I blame the UVF for protecting them,” she said.

“Why were they allowed to do this? Because it wasn’t only us. They had terrorised a lot of decent people of east Belfast,” she added.

“My Daddy and my brother were ordered to go for punishment by appointment. My Daddy said. ‘No, we have done nothing wrong, we were attacked’,” said Ms Johnston.

She said that the intimidation and harassment then started. “They were terrorising us. It has come to this. They attacked my Daddy while he was standing with a man from the church praying,” she added.

The 45-year-old father-of-two died after being seriously assaulted by a gang in Cluan Place in east Belfast around 9 pm on Sunday. He was a well-know loyalist and had been a member of the Ulster People’s Forum which protested against a decision to limit the days the British union flag flew over Belfast City Hall.

One of his relatives posted online that he was a “true volunteer, murdered by his own”.

Ms Johnston said her family approached local unionist and loyalist representatives looking for assistance. “We just wanted this stopped, we just wanted to continue to live our life. But nothing could be done,” she said.

The east Belfast UVF in a statement to the Irish News “wholeheartedly condemned” the murder. “Whoever did it did not do it in the name of loyalism or the UVF,” it said.

Two men and two women who were arrested in connection with the murder have all been released on bail.

Detective Chief Inspector Peter McKenna appealed for public assistance in identifying the killers. He said that those involved ran from Cluan Place to the Templemore Avenue area where they got into a black Seat Leon car, registration number JGZ 7406.

“This vehicle then travelled to Pitt Place and I would like to hear from anyone who witnessed the car travelling in this area, or who saw the people in it, either before or after the murder,” he said.

“The level of violence meted out on Ian by the people involved in his murder is barbaric and it is quite frankly repulsive that they felt it was acceptable,” added Det Chief Insp McKenna.

“There is no place for this inhumane behaviour in our communities and I would appeal for local people to come forward with any information they have so we can remove this intimidation and violence from our streets,” he said.