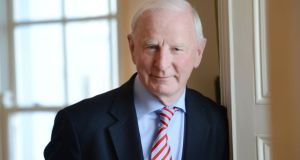 A court in Rio de Janeiro has set a date in November for the start of Pat Hickey’s trial on charges related to alleged ticket touting at the Rio Olympic games.

He faces charges of theft, tax evasion, money-laundering and criminal association after hundreds of tickets to Olympic events were seized by police.

The trial is due to begin on November 29th, almost a year after Mr Hickey left Brazil.

Mr Hickey, the former Olympic Council of Ireland president, had initially been ordered to remain in Brazil upon his release from prison following his arrest during last year’s Olympic Games. He was later given permission to return to Ireland last Christmas, on medical grounds, and on payment of a bail bond of 1.5 million Brazilian real (€400,000).

Prosecutor Marcos Kac said last week that if Mr Hickey did not return to Brazil for his trial, his bond would be retained locally.

In a statement on the Rio de Janeiro courts system website setting the date of the trial, Justice Guilherme Schilling Duarte said only Mr Hickey and Kevin Mallon have so far responded to criminal accusations relating to the ticket touting controversy. Both proclaim their innocence.

Police in Brazil said they found Mr Mallon, from Dublin, in possession of hundreds of tickets for Olympic events, including the opening and closing ceremonies.

Brazilian woman Barbara Carnieri, who was arrested alongside Mr Mallon, has not responded, and is thought to no longer be in Brazil.

Other defendants, originally listed in the Hickey case, have been summoned in a separate and ongoing criminal process.

It is understood Mr Hickey’s legal team will seek to give evidence via video link from Ireland.

Legal advice given to the former OCI president by his Brazilian legal team has claimed his presence is not required in Brazil and the trial can proceed without him being present.

The advice given by Arthur Lavigne Associates in Brazil suggests Mr Hickey could face a maximum 44 years in prison if found guilty of all charges in Brazil.

He also last week said video conferencing is possible during Brazil cases, but that this is not what Mr Hickey had agreed to when he signed his bail agreement that allowed him to go home.