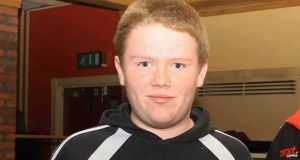 Ronan Hughes, a 17-year-old from Co Tyrone , who took his own life in June 2015 after he was victim of what the police call webcam blackmail.

Sitting in the flat he shared with two other men in Timisoara in western Romania, Iulian Enache tricked a teenager thousands of miles away in the rural town of Coalisland in Co Tyrone to share intimate photographs of himself by posing as a girl online back in June 2015.

Ronan Hughes (17), a pupil at St Joseph’s Grammar School, Donaghmore, was then blackmailed by Enache who threatened to send the images to his friends if the schoolboy did not pay the €3,000 ransom.

Despite pleading with his tormentor: “I’m only 17-years-old, please, I beg” the photographs were sent to five of his friends. Hours after some of the pictures were shared online Ronan took his own life.

Last month Enache pleaded guilty in a Romanian court to blackmailing the teenager and producing/distributing indecent images of a child. He was sentenced to four years in prison.

It followed a n extensive joint investigation by the Police Service of Northern Ireland and Romanian authorities that spanned several countries, including Australia and Belgium, and enlisted the help of Europol and Britain’s National Crime Agency.

Following months of painstakingly piecing together transcripts of Skype communications and the social media activity of the “happy go lucky” Irish teenager and the man posing as ‘Emily Magee’, the PSNI’s specialist cyber crime unit traced the computer used in the ‘sextortion’.

Detective Chief Inspector James Mullen said it was crucial in the period that followed Ronan’s death to secure “as much potential evidence as possible”.

“Ronan’s telephone was key to the investigation and his social media activities. It was trying to see if we could find any link to the person responsible. It took a long time to get the link, we had to get a stronger case against him,” Detective Mullen told The Irish Times.

As the investigation progressed, police discovered Enache had three Facebook accounts, including one they believed was used to blackmail Ronan under the guise of a girl.

“Ronan was exchanging images with this person who was portraying himself to be a woman. Then he made Ronan aware that he would circulate these images if Ronan didn’t send him a certain amount of money,” he said.

Enquiries were made with up to nine countries, including Australia, as police tried to locate the source of IP addresses linked to the suspect’s computer, eventually tracking it to Romania.

By the end of 2015, Europol began assisting the PSNI, whose enquires were mainly focused in Romania, in facilitating meetings between Romanian police and officers from Northern Ireland; presenting the facts of the investigation and agreeing on which jurisdiction to prosecute in.

Mobile phone records, namely internet history, consisted of hundreds of pages of information - which all had to be trawled through - and once police knew Enache was the main suspect they began to focus on particular dates.

‘Link to this man’

“Once we got a tenuous link to the suspect we were able to focus more on dates and periods to show a more substantial link to this man in Romania,” explained Det Mullen.

Det Mullen visited Dunfermline in Scotland where he spoke to police about Daniel Perry, a 17-year-old who took his own life after he too became the victim of a blackmail plot on Skype.

Det Mullen learned from police colleagues there about ways to tackle cyber blackmailing before visiting Europol where he met with liaison officers from the UK and Romania and asked them for help in developing the case.

During a second meeting at the Hague in Holland Europol agreed to take primacy around the investigation and the evidence was presented to prosecutors who translated it into Romanian.

By October 2016 Det Mullen had gathered enough evidence for a prosecution and he flew to Romania and watched as Enache was arrested at his three-bedroom flat on the border of Hungry.

When Enache appeared in a court in Timisoara he pleaded guilty and was sentenced to four years in jail. Under Romanian law he will serve three years, meaning he will be released with time served in October 2019.

Det Mullen described the case as an “absolute tragedy” and with up to at least two reports of cyber blackmail in Northern Ireland per week and 160 incidents in the last year alone - and those are just the reported cases - he warned: “People will continue to unfortunately make these types of mistakes.”

“I think what we have shown is that if you do come to the police, we do offer support. I do feel for the current generation who are so embroiled in social media. They should be able to use it, they should be able to educate themselves. If this happens we can help people,” he said.

Two raids carried out by Interpol in 2014 in the Philippines found ‘sextortion’ scams being operated “on an almost industrial scale from call centre-style offices.”

In 2016, the UK National Crime Agency’s anti-kidnap and extortion unit dealt with 1,247 reports of cyber-enabled blackmail offences in 2016. In 2015, there were four deaths by suicide - all young men - linked to ‘sextortion’ in the UK.

Police say the most important thing for parents is to have conversations with their children; talk to them about the benefits and dangers of the internet and take an interest in their online activities; their favourite websites, online games and interests and keep an eye on what they are doing online.

Parents should endeavour to become net-savvy and to jump in and learn the basics of the internet and be able to ask their children who they are talking to online and what they are talking about.

PSNI advice for teenagers is:

1. Don’t accept friend requests with someone you don’t know - everyone online may not be who they say they are.

3. Don’t post anything online that you are not happy to be shared, particularly nude or nearly nude images or videos. It may seem like a bit of fun with friends at the time but there is always a chance those images could be shared or get into the wrong hands and could lead to harmful situations such as stalking, abuse or blackmail.

4. If someone has made you feel uncomfortable or you have had disturbing interaction online, tell police or a trusted adult. You can ring the police on 101 or for help and advice ring Childline on 0800 1111 or Lifeline on 0808 808 8000.

5. The internet can be a great place but it is important to remember there are people out there who may wish to abuse, exploit, intimidate or bully you online - if this happens to you, tell someone immediately.

6. Remember that if things do go wrong online, there are people who can help.

7. If you receive any inappropriate images or links, it is important that you do not forward it to anyone else. Contact police or tell a trusted adult immediately.

Go to www.getsafeonline.org for advice and information on how to stay safe online.