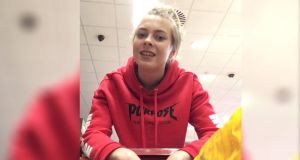 Boy B, one of two teenagers jailed for the murder of Ana Kriégel, has appealed his conviction.

Boy B, one of two teenagers jailed for the murder of Ana Kriégel, has lodged an appeal against his conviction.

The courts service on Tuesday confirmed that Boy B had made the appeal. Tuesday was the last day of a 28 day period following sentencing in which an appeal can be submitted.

It can take a year or more for appeals to be heard, although legal sources suggested that the courts may expedite the appeal, given the boy’s age. Lawyers for the boy must make legal submissions in the case before a date is fixed.If that is done quickly and priority is afforded, the case could be heard within six to nine months, one criminal law solicitor said.

Against that would have to be balanced the fact that he is serving a relatively long sentence, with priority for an expedited hearing usually given for appeals where the person convicted may ultimately end up serving their sentence before their appeal is heard.

The jury in the trial agreed with the State’s case that Boy B had lured Ana from her home prior to her murder, where she was attacked and sexually assaulted by Boy A, who was lying in wait.

While he gave many different versions of what happened subsequently to gardaí during his interviews, he eventually said he saw Boy A attacking Ana. Delivering his sentence, Mr Justice Paul McDermott told Boy B he “actively and knowingly” took part in her killing.

Boy B does not accept the unanimous jury verdict which found him guilty of murder but has said he regrets not doing anything to stop Boy A’s attack on Ana.