Covid-19: Not everyone quarantining at home will face garda checks, Minister says 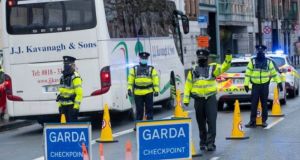 Not everyone who is quarantining at home after being abroad will be checked up on under new Government rules and gardaí will not be entering private dwellings to perform checks, the Minister for Justice has said.

Helen McEntee said some of those returning and obliged to quarantine for 14 days on their return would have gardaí calling to their homes.

If they could not “present themselves” to prove they were at home a prosecution could then be taken, but the hope was that legal proceedings would not be necessary, she said.

Ms McEntee said the Government had made it clear during the pandemic that “we are not going to have gardaí going into peoples’ homes” in response to gatherings or parties taking place and this would not change due to the new laws on quarantine.

The Minister has spoken to Garda Commissioner Drew Harris about the matter, and while full details were still being worked on, gardaí will have access to contact details provided by those landing in the State on their passenger locator forms.

She said “a certain amount of people would receive a follow-up call from An Garda Síochána” though it was not possible for everyone to. Those who were called on and did not present themselves could face a conviction and a fine of up to €2,500 and six months in prison.

Ms McEntee said the issue of people traveling over the Border was “challenging” and politicians North and South and the PSNI and Garda were in contact on the matter. The situation was under “ongoing” review but she believed the vast majority of people who were asked to turn around and go home were complying when they were found to be more than 5km from without good reason.

Earlier, the Association of Garda Sergeants and Inspectors (AGSI) had said the prospect of members of the force having to go into people’s home to check they were quarantining was a worry and a possible health and safety risk.

AGSI general secretary Antoinette Cunningham said the group had received no instructions and had not been consulted about what approach to take.

“The practical application of these regulations for sergeants and inspectors is unclear and we see significant and very serious operational and logistical challenges,” she said.

Garda sources doubted if gardaí would have an on-site presence at any hotels that could used for quarantining some of those arriving from abroad.

“You could see a situation where we carry out the criminal investigation into people who breach these measures, but it’s doubtful we would be at hotels making sure people didn’t come out of their bedrooms,” said one source.

Another said non-Garda personnel, on behalf of the Department of Health, had since last year been making check calls to ensure people were quarantining at home for up to 14 days after being abroad. However, it was not clear now if gardaí would be assigned responsibility for that task under the new measures.

A number of senior Garda personnel expected it could be several weeks, possibly longer, before the legislation and other changes required to implement the new travel-related proposals are in place.

They said a range of on-the-spot fines were announced last October but were only fully rolled out on January 11th because the IT fixes required across the Garda, Director of Public Prosecutions and Courts Service took time to put in place.