Woman died after induction at Rotunda 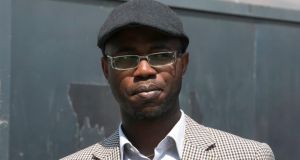 Abiola Adesina, the partner of Bimbo Onanunga, at the Coroners Court Inquest into her death. Photo: Gareth Chaney Collins

A verdict of medical misadventure was returned at the inquest into the death of a woman whose uterus ruptured after she was medically induced at the Rotunda Hospital to deliver her stillborn baby.

Bimbo Onanuga (32), a Nigerian-born mother of one who lived in Finglas, Dublin 11, died on March 4th, 2010, having suffered massive internal bleeding.

Doctors at the Rotunda discovered the rupture when they carried out an emergency Caesarean section after she went into cardiac arrest. The court heard that the baby had delivered through the rupture into the abdominal cavity.

She was subsequently transferred to the Mater hospital where she died later that day.

On the final day of the inquest, the master of the Rotunda, Dr Sam Coulter-Smith, denied claims by Ms Onanuga’s partner, Abiola Adesina, that he told the family that her death was “due to a series of mistakes”. He said when he spoke to the family he did not have sufficient information to say that there had been errors.

Rupture
The inquest had previously heard that the postmortem found that the placenta had implanted at a part of the uterus which had previously been weakened and thinned by scarring. This was the site of the rupture.

Ms Onanuga had previously had a termination and Dr Coulter-Smith said that it was “probably reasonably safe to assume” that the scarring had been caused by an unrecognised perforation during that procedure, which predisposed her to rupture. Doctors at the Rotunda were aware of the termination but there was no information in relation to any complication that may have occurred, he said.

The family had raised concerns about the use of ulcer medication, misoprostal, in the induction of Ms Onanuga’s labour. The court heard from Dr JM Morris, director of scientific affairs at the Irish Medicines Board, that the drug is not licensed for this purpose in Ireland but that such off-label use of medication is common.

The court heard that the Rotunda had adopted a number of recommendations following a review of the incident. The protocol for induction of labour in foetal deaths has also since been changed.

Returning a verdict of medical misadventure, coroner Dr Brian Farrell said that the principal risk factors were the pre-existing scar and the misoprostol, which caused the uterine contractions.

He said that the intention of the doctors was to induce delivery because the baby had died and the unintended action was the death of Ms Onanuga. He will write to the medicines board raising the family’s concerns about misoprostol.

Tragically, Ms Onanuga’s daughter, who was born with disabilities, died a few months after her mother, the court heard.