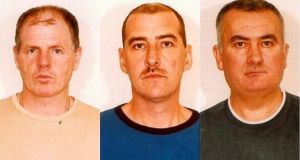 The Supreme Court has, by a four/three majority, dismissed the State’s appeal against orders directing the release of three dissident republicans serving sentences in Portlaoise Prison after being convicted in England 14 years ago of trying to buy weapons and explosives on behalf of the Real IRA.

The three Co Louth men were jailed for 30 years in England which sentences were later reduced to 28 years.

In the High Court in September 2014, Judge Gerard Hogan ordered the men be released “forthwith” after finding the High Court had no jurisdiction to retrospectively adapt, so as to achieve compatibility with Irish law, the defective warrants under which the three were detained here following their transfer from English prisons in 2006.

He refused to grant a stay on his order, with the effect Fintan O’Farrell and Declan Rafferty, both from Carlingford, Co Louth, and Michael McDonald, from Dundalk, whom the State sought to keep in jail until October 2016, had to be freed.

In his judgment, Judge MacMenamin said this was “a troubling case and many would say, having committed these very serious crimes”, the three should be made face the full consequences of their actions for the full period of the sentence imposed.

However, the process whereby they were placed in detention in Ireland was “fundamentally defective” and the warrants were “void ab initio” (from the beginning).

He also held the jurisdictional deficiencies cannot be corrected, either under the provisions of the Transfer of Sentenced Persons Acts or via the inherent jurisdiction of the court.

The minority court disagreed the warrants could not be varied and held it could be varied to provide for a term of imprisonment of 18 years and eight months, less time already served in England.

In a joint judgment, Judges Clarke and O’Donnell, with whom the Chief Justice agreed, said the fundamental problem in this case arose because of the diaconate between the sentence announced in the English court, the provisions of UK statute law concerning the meaning of such a sentence, plus the manner in which such a sentence should be recorded for the purposes of a prisoner’s transfer.

Such matters should be clearly resolved in the courts of the sentencing state, they said.

It was in the long term interests of all prisoners and their families, as well as the public interest, the regime under the Transfer of Prisoners act should have clear and effective application on the ground rather than give rise to complex and protracted litigation in courts, they stressed.

The court was previously told the three, who sought arms and financial support from the Iraqi government, were arrested by Slovak police in July 2001 after they met two agents whom, they believed, were Iraqi arms dealers but were in fact undercover British security agents.

All three were extradited to England where, in 2002, they pleaded guilty at a London court to charges under the UK’s 2000 Terrorism Act and conspiracy to cause explosions in London.

Their 30 year sentences were later reduced to terms of 28 years and in 2006 they were transferred to Ireland and detained in the Midlands Prison, Portlaoise.

Lawyers for the three in June 2014 secured a High Court inquiry into the lawfulness of their continued detention and in two judgments of August and September 2014, Judge Hogan held their detention was unlawful and directed their release.

Judge Hogan ruled the warrants detaining the three were defective on grounds including arising from another Supreme Court decision - the Sweeney case - addressing incompatibility between the English sentencing regime and Irish law.

Judge Hogan said, had the three men remained in England, they would have been entitled to release on licence after serving sentences of some 18 years and eight months. However, the 2006 warrants under which they were detained here recorded their sentences as 28 years and were therefore defective.

The judge said the sentences of the three men should have been adapted, under the terms of the 1995 Transfer of Sentenced Prisoners Act, so the nature of the English sentence could be modified to reflect the true equivalent sentence as might have been imposed by an Irish court.

He later ruled the warrants could not be varied or adapted to address the defects identified.