Man who smuggled note out of prison guilty of IRA membership

Brian Kenna caught with communiqué from republican prisoners in Portlaoise 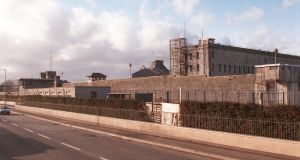 A Dublin man who smuggled an IRA communiqué out of Portlaoise prison has been convicted of IRA membership by the Special Criminal Court.

During his trial, the three-judge, non-jury court heard evidence from Garda Assistant Commissioner Michael O’Sullivan who said that he believed Kenna was an IRA member on the date in question.

Supporting evidence for the assistant commissioner’s belief was that in November 2014 Chief Superintendent Tom Maguire briefed members of the Special Detective Unit (SDU) of the information that Kenna would be in Portlaoise prison engaging in IRA activities.

The court saw CCTV footage of Kenna arriving at Portlaoise prison at 10.20am.

Later that afternoon, when he left, he was seen holding white objects in his left hand, which gardaí later discovered were Christmas cards.

Kenna was stopped by the detectives in the prison’s carpark, and was searched by Det Sgt Boyce. When the detective turned out Kenna’s jeans’ right pocket a small item wrapped in clingfilm fell to the ground.

Kenna denied any knowledge of the item and laughed.

The detectives recognised the item as an IRA communiqué.

Inside the clingfilm were three cigarette papers, adhered together, and covered in handwriting.

The message described a debriefing that had been carried out of three men recently arrested after an intercepted IRA operation in Rathkeale, Co Limerick. The men had been in custody in Portlaoise prison but had been released on bail.

Two of the men, Conor Hughes and Darren Fox, later pleaded guilty to the unlawful possession of a sawn-off shotgun and two shotgun cartridges at Kyletaun, Rathkeale, Co Limerick on October 31st, 2015.

A third man, James Smithers, was found guilty of membership of the IRA on the same date.

The message said that the men had “behaved as expected in custody” and was signed by the commanding officer of the IRA in Portlaoise prison.

Delivering judgement on Thursday, Mr Justice Tony Hunt, presiding, said that the court was satisfied it was a communiqué in relation to IRA activities, suggesting that the three men had been observed and debriefed in prison.

Mr Justice Hunt said it was not a reasonable proposition that the document came to be in Kenna’s pocket without his “knowledge, input or consent”.

It was “an active and deliberate act in the furtherance of the aims of the IRA”, the judge said, adding that carrying the message was a task that was “not to be entrusted to the ignorant or the untrustworthy”.

Kenna was remanded in custody until May 29th, when he will be sentenced.