Jury asked to give man ‘benefit of doubt’ over Monet damage 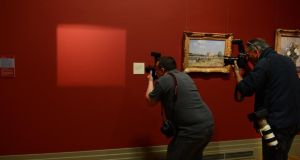 Photographers at the scene in the National Gallery of Ireland where a Monet painting was damaged in June 2012. Photograph: Cyril Byrne.

The jury in the trial of a man accused of putting his fist through a Claude Monet painting has been told it must give him the benefit of the doubt.

Andrew Shannon (48) claims his serious heart condition caused him to feel faint and “collapse” against the painting at the National Gallery of Ireland on the June 29th, 2012.

His barrister, Brendan Grehan SC, asked the jury at Dublin Circuit Criminal Court to give his client “the benefit of the doubt.”

Mr Grehan said while Mr Shannon’s explanation may seem “unusual” or even “unlikely,” he is entitled to the most favourable inference of the evidence.

In his closing speech, Mr Grehan cited comedian Spike Milligan’s epitaph, written in Irish: “Dúirt mé leat go raibh me breoite,” which translates as “I told you I was ill.”

He described it as an “amazing coincidence” that someone who claimed he had a heart episode went on to have a life-saving quadruple bypass a year later.

Mr Grehan told the jurors that if they are left with a doubt that the damage just might have been accidental, it is their duty to find the accused not guilty.

He asked the jury to look at Mr Shannon’s legs in the CCTV footage and notice how he “buckles at the knees” when he comes into contact with the painting, which he said suggests a “momentary weakness”.

Mr Grehan dismissed evidence about the speed of the impact on the painting as “meaningless” as he said the canvas was 140 years old and “incredibly brittle and fragile.”

“You could poke your finger through it,” he said.

However, Kerida Naidoo BL, prosecuting, claimed Mr Shannon had tried to use his condition as a “fiction” and a “mask” to cover a deliberate act of vandalism.

Mr Naidoo said evidence given by the consultant heart surgeon, the medical expert called by the defence, was “directly at odds” with what Mr Shannon claimed.

He said surgeon Nicholas Walcott had pointed out that dizziness was not a symptom of Mr Shannon’s heart condition, and that there was no medical history of him collapsing in the way he described.

He reminded the jury that the surgeon said if Mr Shannon had collapsed, he would not have got back up again.

He also cited the evidence of the paramedic who examined Mr Shannon at the scene and said his condition was normal.

Mr Naidoo said the conservator working to restore the painting concluded that there was “speed and force” behind the blow that damaged the painting, which had set off alarms on the other side of the wall.

Commenting on the CCTV footage, Mr Naidoo observed that during his visit to the gallery, Mr Shannon didn’t stop to look at other art work until he got to Room 10 where the Monet painting was.

He said Mr Shannon looks at the Monet painting, leaves the room, comes back, walks half way around then diagonally straight across the room and lunges at the painting.

“He has to have been terribly, terribly unlucky to have damaged it accidentally,” he said.

Mr Naidoo said the two eye-witnesses who were standing a couple of feet away gave “clear evidence of a deliberate attack”.

He said Mr Shannon didn’t once ask about the painting he had damaged, and that his attitude was “not what you would expect from an innocent person.”

He reminded the jury that the State does not have to prove a motive.

He said all the jury has to decide upon is whether Mr Shannon deliberately damaged the painting, without speculating as to his motivation.

The 1874 painting, entitled Argenteuil Basin with a Single Sailboat, is valued at €10 million.

The trial continues tomorrow before Judge Desmond Hogan and a jury of six women and five men. One juror has been discharged.