Woman fails in bid to introduce evidence in repossession case 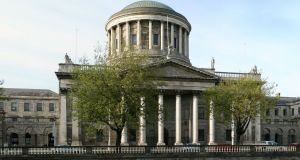 In September, Ms Justice Caroline Costello dismissed her case as frivolous and bound to fail.

The High Court has refused a woman’s application to introduce more evidence into a case over repossession by a fund of a house that she owned.

Patricia Hinde brought the application as part of her efforts to block a receiver appointed by Pentire Property Finance selling her house at The Beeches, New Road, Straffan, Co Kildare.

She got a €385,000 mortgage from Bank of Scotland Ireland (BoSI) in 2006 to buy the house. The loan was later transferred to Pentire which, in 2017, demanded immediate repayment of the outstanding loan amount of nearly €349,000.

The receiver, Tom Kavanagh, entered a contract to sell the property at auction last April but Ms Hinde registered a “lis pendens” - a legal question mark over the property pending further determination - against Pentire and the receiver.

She also brought proceedings against Pentire and the receiver seeking damages for, among other things, trespass, negligence and interference with contractual relations. She claimed, among other things, Pentire was not entitled to enforce the loan and the transfer of the loan from BoSI was unenforceable against her.

The defendants then applied to have her proceedings struck on grounds they did not disclose any cause of action, were frivolous, vexatious and bound to fail. They also sought the lifting of the lis pendens.

In September, Ms Justice Caroline Costello dismissed her case as frivolous and bound to fail. She also lifted the lis pendens.

Subsequently, the judge dealt with an application by Ms Hinde, which had been made earlier in the proceedings, to introduce new evidence in relation to the transfer of the loan by BoSI.

Dismissing that, the judge said the evidence she now sought to introduce could have been put before the court at the previous hearing. In any event, the materials “could not have had an important influence” on the result of that case.

The materials did not relate to the case she had pleaded and related to mainly assertions which were unsupported by any evidence, the judge said.

Man dies in hospital after car enters water in Co Down 17:51
Ireland needs to move to ‘zero-Covid’ policy to avoid catastrophe, scientists say 17:48
Coronavirus: 45 new cases but no further deaths reported in the State 17:46
Dublinbikes annual charge to increase by 40 per cent 17:40
Varadkar says NPHET advising a ‘cautious approach’ over further reopening 17:56